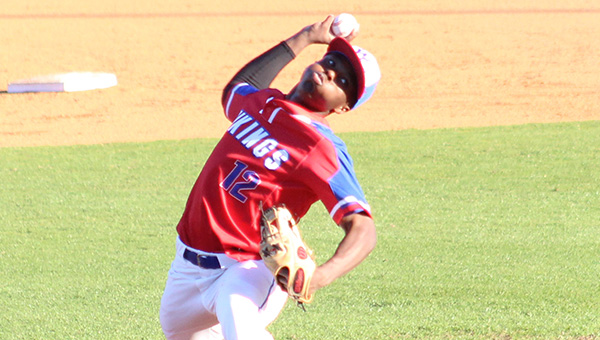 FLOWOOD — Warren Central still looked a little rough around the edges offensively, but at least it found its way back into the win column.

Vantrel Reed pitched six shutout innings, and the Vikings manufactured enough runs to overcome some less-than-stellar baserunning as they beat Davidson (Ala.) High School 7-0 Thursday in the Mid-Mississippi Classic at Northwest Rankin.

Warren Central had scored just one run over its last 11 innings in losses to Northwest Rankin and Brandon, and did not have a baserunner in seven of those innings. On Thursday it scored in each of the first three innings and at least one batter reached base in every frame.

“We did a lot of things right, but we did a lot of things we have to be better at. And it’s things that we know better than,” Warren Central coach Conner Douglas said. “I don’t know if we were getting ahead of ourselves and trying to make too many things happen, because we were trying to preach yesterday being aggressive and making things happen. But it’s good to get back on the right track today.”

Reed, a sophomore making his first varsity start on the mound, was stellar for the Vikings (2-2). He didn’t allow a hit until the fourth inning, and threw six scoreless. He struck out six batters, and allowed two walks and three hits.

Morgan Jarabica finished up with a scoreless seventh inning.

“I felt comfortable. All my pitches were working, and I feel comfortable when all of my pitches are working because the hitters are off-balance,” said Reed, who only needed 70 pitches to get through his outing.

Reed’s performance on the mound helped the Vikings sidestep a nightmarish one on the basepaths. They had three runners thrown out — one trying to score on a ground ball, another doubled up at second base on a deep fly ball, and a third picked off of first. They avoided another disaster when Sean Daily escaped a rundown in the third inning.

“It’s mental, and a lot of it is just trying to be too aggressive,” Douglas said. “We’ve been preaching be aggressive and be your own coach, and I think they took that to a whole new level. We’ve got to stomp it down some, especially with less than two outs and the heart of our order up.”

The Vikings did do some good things at the plate. Reed had an RBI triple in the first inning to bring in the first run of the game, and Logan Stewart an RBI double in the second. Two more runs scored in the third inning to make it 4-0, and then three in the sixth to ice it.

Warren Central will continue its run in the Mid-Mississippi Classic Friday at 2:30 p.m., against Faith High School from Mobile at Northwest Rankin. On Saturday, the Vikings play Tuscaloosa-based Northridge High School at 2 p.m. at Pearl.

Hartfield Academy (3-0) scored four runs in the top of the seventh inning — the last two on an error — to beat Porters Chapel Academy (4-2) and snap the Eagles’ three-game winning streak.

Chase Yearwood had an RBI single during Hartfield’s seventh-inning rally and finished 2-for-4. Ryan Holifield doubled and drove in a run with a sacrifice fly.

PCA only had two hits, one of them a double by Bradley McCullough in the first inning. McCullough later scored on a bases-loaded walk to Garrett Hutchins, and the Eagles added another run on a passed ball.

Bailey McMillian drove in a run with a ground out in the fifth inning to put the Eagles ahead 3-1.
Cole Pittman allowed one run on four hits in six innings. He walked four batters and struck out five.