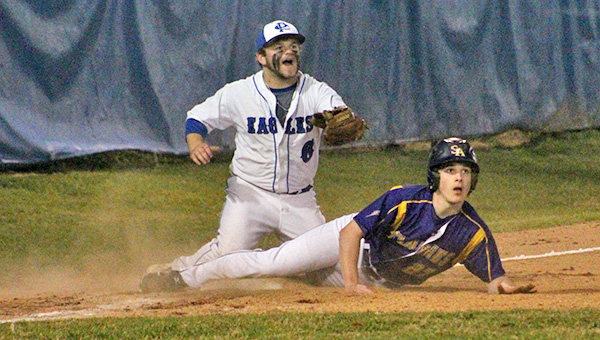 After not playing for two weeks, St. Aloysius was understandably sluggish and took a while to get going Friday. It dovetailed nicely with Porters Chapel Academy’s recent inability to close.

St. Al scored 15 runs in its last three at-bats to blow open a tight ballgame and beat its crosstown rival 18-2. The Flashes batted around in both the sixth and seventh innings, and scored six and seven runs in those two frames respectively.

“To be honest with you, I knew we’d probably come out a little flat not having played in a week and a half. It’s the first day we’ve had our full lineup here,” St. Al coach Sid Naron said. “I knew it was going to take some adjusting, especially since (PCA pitcher Kyle Guider) was mixing fairly well and stymied us for the first three innings. I felt like once we could get through that lineup one time we could start causing some problems.”

For the second game in a row PCA (4-3) let a game get away in the late innings. It lost 5-3 to Hartfield Academy on Thursday by giving up four runs in the seventh inning.

The Eagles got both runs Friday in the first inning when Cole Pittman doubled — St. Al center fielder Kieran Theriot lost an easy fly ball in the lights and it fell in — and then only had four hits after that.

“(Hartfield) was really more about trying to find roles for guys early in the season. We’ve got to find out who can start, who can relieve, who is more comfortable in what siutation. Tonight, we were in it for five innings and you let crooked numbers get put up on the board and it started snowballing,” PCA coach Wade Patrick said. “Our biggest thing is we’re not hitting the ball right now. We’ve got to collect more than three hits.”

Josh Collins was the star early on for St. Al (3-0). He tripled in a run in the third inning and then scored on a ground out to put the Flashes ahead 3-2.

That score held until the fifth, when the Flashes scored two unearned runs. In the sixth, they used RBI singles by Theriot and Justin Ehrgott, along with a couple of walks and an error, to stretch the lead to 11-2. In the seventh, Landon Middleton had a two-run triple and Jake Pierce an RBI double to put an exclamation point on things.

Collins’ triple was his only hit of the game, but he drew a bases-loaded walk and hit a sacrifice fly to finish with three RBIs. Pierce went 4-for-5 and Ehrgott was 2-for-3 with two RBIs.

Garrett Breithaupt pitched six innings and allowed only the two first-inning runs. He struck out five batters, walked one, and surrendered five hits.

“I really didn’t expect it. We were in question on who to throw tonight, but we knew he could keep the ball down and mix pitches, and I thought he did a tremendous job,” Naron said.