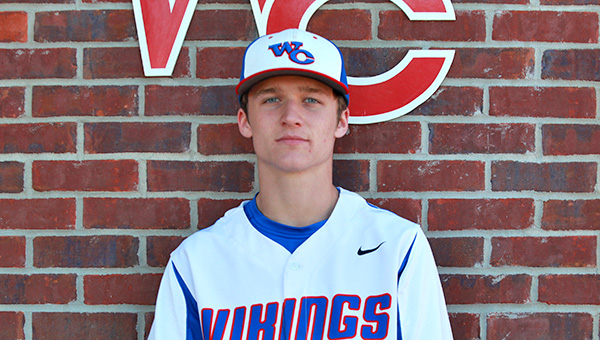 Warren Central baseball player Landon Stewart went 2-for-4 with a double and four RBIs in a 12-2 win over Faith Academy (Ala.) Friday afternoon.

Whatever slump Warren Central’s baseball team was in at the beginning of the week, it appears to have become a distant memory by the weekend.

Landon Stewart went 2-for-4 with a double and four RBIs, and pitcher Aaron Greene allowed one run in five innings as the Vikings pummeled Faith Academy (Ala.) 12-2 Friday at the Mid-Mississippi Classic at Northwest Rankin High School.

Warren Central (3-2) lost two games to Northwest Rankin and Brandon earlier in the week in which it only scored one run over a span of 11 innings and was retired in order seven times.

In wins Thursday and Friday over Alabama schools Davidson and Faith, WC scored 19 runs on 22 hits.
Unlike Thursday’s 7-0 win over Davidson, when the Vikings had runners on in every inning, they did most of their damage against Faith with two big rallies.

WC scored five runs in the fourth inning to take the lead for good, and put the game on ice with a six-run rally in the seventh. A hit batter and a walk with the bases loaded, as well as an error that brought in two runs, spurred the first rally. Stewart’s bases-clearing double keyed the one in the seventh.

D.J. Lewis had two RBIs and scored three runs for without getting a hit. He walked twice with the bases loaded. Logan Stewart also had an RBI single.

Greene allowed three hits, one run and no walks in five innings. He struck out six batters.
The Vikings will finish their three-game set at the Mid-Mississippi Classic when they take on Northridge, a team from Tuscaloosa, Saturday at 2 p.m. at Pearl High School.

Authorities must focus on how teenagers are getting hands…