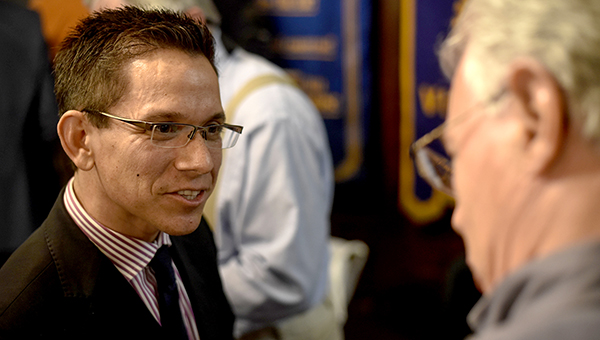 Pablo Diaz is greeted by Biedenharnafter speaking at the March 3rd Rotary meeting at Beechwood Restaurant and Lodge on Thursday. Diaz was recently hired by the Vicksburg-Warren County Chamber of Commerce for the position of Economic Development Leader. (Courtland Wells/Vicksburg Post)

Pablo Diaz remembers one of his first conversations with officials after arriving in Grenada.

“I told them, ‘My job is to go out there and sell; tell them (prospective businesses) everything about this very pretty monkey. When they come here, the monkey better be pretty.’”

One of Diaz’s challenges will be to educate officials and the public about the process.

“I don’t you expect every stakeholder or elected official to be an expert in economic development,” he said. “But I think by communicating an educating together with them about the process of economic development you are able to get to a point where they understand what goes on and why certain things are done in certain ways.”

Another is developing the plan to make Warren County a competitor in the economic development marketplace.

To develop the strategic plan, Diaz wants to listen to the community. “We want to bring the input from all the leadership, from anyone who wants to call me and give me their thoughts.

There are opportunities, available, he said, but people working on the plan are going to have to analyze “not only what we’ve got but how does it compare when we benchmark it with those who win all the projects.”

“If you look at it in a vacuum, you can pat yourself on the back all day, but if you don’t know how to benchmark yourself with the competitors, then how do you ever improve, and how do you ever win.”

Economic development, Diaz said, is changing fast because communications and technology change, and a community has to take advantage of change at the local level to actually put itself out there as a strong competitor.

“Even though Grenada is a small community we make sure we take advantage of technology to put Grenada on the map in front of the stakeholders that matter in terms of site selection consultants, economic development officials at the state level, regional level, national level, and really showcase the community to the outside.

“That’s the important thing we’re going to remember in Vicksburg.”

He said he has two audiences to address — the internal audience composed of Vicksburg and Warren County residents, “And we need to make sure we care about our community, and we investing in our community so that we can become competitive, and we have the very important audience out there, outside Warren County that is looking in and trying to understand what this community is all about.

“We have to make sure we’re fixing the issues we have, so we could talk about them when the prospects come,” he said.

“The people looking at us are going to ask, ‘What is the business climate in this community? Am I going to bring my daughters into this community? How do they compare with all the other communities that are chasing my project.

It’s a plan that starts with a laying out a strategy developed by listening to the public, education, and being aggressive and taking risks to attract companies here.

“What it boils down to leadership, not magic, because everything we’re going to be able to do is going to depend on the leadership of this community being aggressive with us, taking risks with us, and learning with us through the process of how to do economic development and how to be respected in the world of economic development outside of Warren County.

One of the reasons he came to Warren County, Diaz said, was because “we have ton of assets that I don’t have right now in Grenda, and I’m hungry for those assets, too.”

“It seems to me there is a lot of untapped opportunity, and that if you organize or orchestrate a good economic development effort, and you actually make the investment necessary to tell the outside world the story of Vicksburg and the vision of tomorrow, you would actually generate a lot of activity.

“I think that is one of the most important things for us to do. Really tell our story out there to the economic development stakeholders and companies looking to invest.”

Among those assets, he said, are the area’s transportation infrastructure and the Port of Vicksburg.

“You have an amazing concentration of highly educated citizens who come through the U.S. Army Corps of Engineers and ERDC (Engineering Research and Development Center). Our challenge would be to organize that asset and galvanize the community to come together and make an investment in economic development.”

He sees the Continental Tire plant between Vicksburg and Clinton as a great opportunity for the area, adding, “We need to hurry up and position ourselves to capitalize on the ancillary businesses that might be one of those low hanging fruit.”

One of the first things, he said, is to prepare the materials that tell the area’s story “ so we can put that story in the minds of all those people who might be managing the ancillary businesses.” Those businesses and suppliers are going to come, he said, “but we just need to be up front and aggressive and strategic about it and they are defintely going to have to be one our top priorities.”

Woman works to track down the truth about her family

Was he the mayor elect or a horse thief? Kathy Tobin had been told conflicting stories as a child. Her... read more