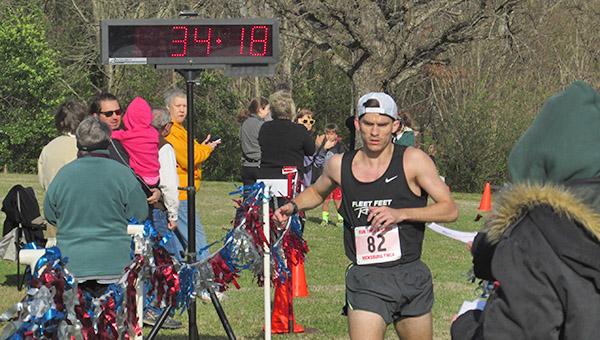 Ryan Crandall crosses the finish line to win the 2017 Run Thru History 10K Saturday in the Vicksburg National Military Park. Crandall won with a time of 34 minutes, 18 seconds, more than 2 1/2 minutes ahead of runner-up Cyrpian Ngetich. (John SUrratt/The Vicksburg Post)

The last time Ryan Crandall competed in the Run Thru History was 2010.

He returned Saturday to finish in a time of 34 minutes, 18 seconds and took the men’s and the overall trophies back home to Madison. Cyprian Ngetich, a Kenyan and student at Hinds Community College, finished second in the 10-kilometer run in the Vicksburg National Military Park, with a time of 36:52.

“I knew I was going to win when I stopped hearing footsteps,” said Crandall, a Mississippi College student who runs on the school’s cross country and track teams. “That was a half-mile into the race.”

Ngetich said he realized he would finish second “at about 500 meters” into the race. Although it was his first Run Through History, Ngetich said he had been running in the VNMP for training.

In the women’s division, Keri Frazier continued her dominance. The Vicksburg native who now lives in Birmingham, Alabama, won with a time of 42:37. The 34-year-old won the Run Thru History’s women’s title for the fifth consecutive year, and for the 11th time in the past 16 years.

Kristi Hall was the women’s runner-up for the fifth year in a row, and eighth time overall, with a time of 43:48.
Frazier said she knew she would take the women’s title about three miles from the finish. 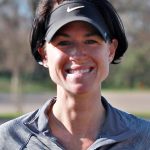 “I was running with a group of guys, and I heard someone say, ‘First woman.’ That was at the 3-mile marker. I knew then I would win, because I was halfway through. I was running with someone, so there was someone pushing me along, and the walkers were cheering me on,” Frazier said.

Frazier said her experience running in the park as a teenager helped her prepare for its hilly terrain. Her first RTH championship came in 2001, when she was a senior at Vicksburg High School.

“I was not surprised by the hills, they didn’t come as a shock. My parents still live here and I come visit them and run this race,” she said. “I’ll keep coming back every year as long as I have that weekend open.”

Duplichain not only beat Fore, she sidestepped a challenge from Mother Nature.

More than 700 runners and walkers participated in the 38th annual Run Thru History, which got off to a cold start with temperatures in the low 40s and a brisk wind. Participants and spectators were serenaded by march music, and had the opportunity to see Civil War re-enactors dressed as Gen. and Julia Dent Grant, Jefferson and Varina Banks Howell Davis, and two park rangers dressed as Union and Confederate soldiers.

The participants came dressed in a variety of garb; some in shorts, others with leggings and shorts, others in warm-up suits and some in street clothes. Many wore shirts or jackets with the names of other events they’ve participated in.

Runners Ryan Alarcon and Julie Vicars, both from Vicksburg, wore jackets from the Spartan Trifecta, an obstacle course race. Alarcon was competing in his first RTH. It was Vicars’ second.

Not far away, Eaton employees gathered to await the start of the RTH’s 5K race walk. The company had several teams entered in the team division.

“I hope we win the corporate trophy,” said Lulu Selma, a human relations generalist at Eaton. “This is part of our fitness and wellness program.”

The race takes runners on a winding course through the park and past its markers and monuments, with the finish line at the front of the park.

Col. Bryan Green, commander of the U.S. Army Corps of Engineers Engineering Research and Development Center, who was running the race for the first time, said he enjoyed the experience.

“This is a fantastic course,” Green said. “I will tell you, from a Vicksburg history point of view, three times I tried to take the hill … and three times the terrain of Vicksburg threw me back down. But it is a very fun course.”

PEARL — The first week of Warren Central’s baseball season was a rollercoaster, and it ended on a decided downturn.... read more