Authorities show what can happen when you drink, drive 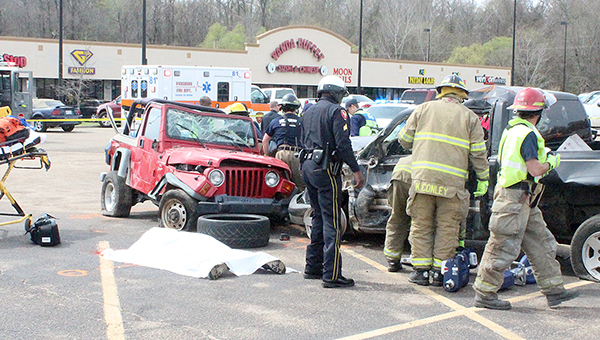 MOCK WRECK: Vicksburg firefighters and emergency medical workers work to remove the driver of a damaged pickup during a mock wreck Saturday at Walmart to call attention to drunk and distracted driving. (John Surratt/The Vicksburg Post)

A southwest section of the parking lot at Walmart was marked off by crime scene tape keeping about 50 people away from the scene of a car wreck with injured victims on the ground and in and on two vehicles that met head-on.

The accident was staged as part of an awareness program calling attention to the dangers of driving under the influence and distracted driving. For the next hour, the crowd watched as the wreck was called in and police and emergency medical workers arrived to tend to the injured and lay a sheet over a lone fatality on the pavement near one of the vehicles.

They would watch as the driver of one of the vehicles took a field sobriety test and was led away in handcuffs by police. During entire scenario, narrators named the teenage victims, their “injuries” and their chances of survival. The mother of the dead teen would show up and express her anger and sorrow.

“The No. 1 killer of teens in this country is car crashes, and Mississippi is fifth in the nation,” said Tawni Basden, youth safety program coordinator for Children’s of Mississippi, an affiliate of the University of Mississippi Medical Center.

She said the mock wreck was developed by the Vicksburg Police Department, Warren-Yazoo Mental Health, Impact Coalition and the four high schools in the county to create awareness of “how many teens we lose in car crashes right before prom. “

“We try to do this before all four proms, and the first prom is next week,” Basden said. “We hope to bring awareness to DUI and distracted driving. We did seatbelt checks at both (public) high schools and both were under 60 percent compliance, so we will be bringing a seatbelt program to the schools.”

“One bad act can have a disastrous effect on so many people,” Police Chief Walter Armstrong said at the close of the demonstration. “We don’t like to have to go knock on someone’s door to tell them their lives have been changed because of someone’s bad act.”

For Hickman, service means giving back