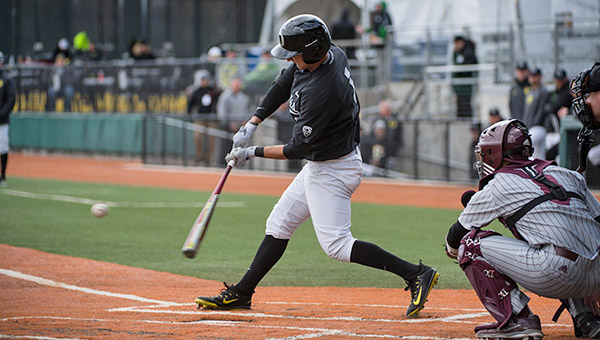 EUGENE, Ore. — Mississippi State played three good games on its road trip to Oregon, but only one result felt good — and it wasn’t Sunday’s.

Kyle Kasser hit a walk-off RBI single in the bottom of the 11th inning Sunday to give Oregon a 6-5 win over the Bulldogs in the finale of their three-game series.

All three games were decided by one run, with Oregon winning the opener and the finale.
Mississippi State (7-5) rallied from a 4-0 deficit Sunday to take a 5-4 lead in the seventh inning.

Elijah MacNamee had a two-run double in the sixth inning, and Jake Mangum tied the game at 4 with an RBI double in the seventh. Ryan Gridley then delivered an RBI single to score Hunter Stovall with the go-ahead run.

Oregon tied it in the eighth, however, and then won it in extra innings.

Mangum and Gridley both had big days at the plate for Mississippi State. Mangum went 4-for-6 with a double, RBI and a run scored. Gridley had three hits, drove in one run and scored another.

Mangum, Gridley, Luke Alexander and Brent Rooker — the Nos. 1-4 hitters in the lineup — had 11 of the Bulldogs’ 15 hits and drove in all five runs.

Mississippi State pitcher Ryan Cyr allowed one run and struck out seven in a career-high 5 2/3 innings of relief work. He wound up with a no-decision, but held the Ducks in check long enough for the Bulldogs to climb out of their early hole.

Kenyon Yovan (1-0), the last of four Oregon pitchers, got the win. He pitched three innings of scoreless relief and struck out six.

Oregon’s pitchers recorded 13 strikeouts Sunday. They had 39 in the three-game series.
The Bulldogs have struck out 112 times in 12 games, which leads the Southeastern Conference. Texas A&M is second with 110.

Mississippi State, which has lost three of its last four games, will return home to Dudy Noble Field for a midweek game with Louisiana Tech Tuesday at 6:30 p.m.

LAFAYETTE, La. — Southern Miss had to work long and hard to finally get the best of Louisiana-Lafayette. Cole Donaldson’s... read more