For Hickman, service means giving back 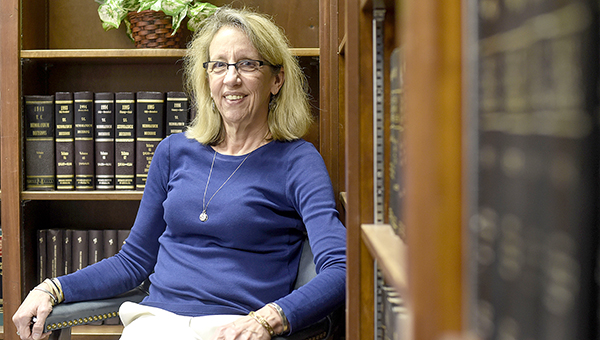 Barbara Hickman is a person who wears many hats.

A member of United Way of West Central Mississippi, active with PAWS Rescue, and possessor of an alter ego, Bob the Dog.

An employee in the support staff at May & Co., Hickman has lived in Vicksburg since 1971, and has been involved with United Way since joining the company.

In 2012, she was named Volunteer of the Year for her work on the board and for her work assisting the organization. “I tried to be available when they needed something,” she said.

Hickman is presently a member of the United Way campaign cabinet and in charge of the campaign coordinators who work to coordinate the campaigns at each business participating in the annual fund drive.

“I help encourage the coordinators to get their businesses involved to see what they need,” she said. “I call them and tell them to let me know what they need; I’ve called and gone to businesses and worked with them. If they have issues, I try to help with it; sometimes, they may have a problem getting people involved get with United Way.”

She said being a campaign coordinator helps when it comes to working with the coordinators, and she uses that experience to help other coordinators encourage people to start giving, and in some cases encourage them to continue giving.

She has another experience that helps her relate with the United Way’s agencies and their programs.

“I’m a recovering alcoholic and drug addict,” she said. “I’ve been clean and sober for 23 years.”

And while she was never a beneficiary of the programs offered through United Way, “I have more empathy with a lot of people and what they go through. It’s an extra incentive as a coordinator, especially having been on disability and my own struggles. I can relate to so many of the situations.”

But Hickman believes her best volunteer work is not with United Way, but as a friendly, affectionate character called “Bob the Dog,” which is a representative for United Way and PAWS.

Hickman, who said she has always been interested in animal rescue and has three rescue animals at home, said Bob came into being one Halloween.

“We dress up for Halloween at work, and bought this dog costume. I just decided to run with it (after the holiday).”

Hickman said she saw PAWS president Leigh Conerly during a visit to the veterinarian and told her she had a big dog outfit, “And if she ever needed me to let me know. It was a while later, and I got an email from her and she was ready for Bob.”

Bob’s name was later decided during an appearance for PAWS.

‘We were at Pet Sense doing an event for PAWS, and there was a girl from the newspaper who wanted to take our picture, and she asked me if the dog has a name. Even though my name is Barbara, my father used to call me Bobby, so I just said, ‘Let’s call him Bob.’ It just seemed simple and to the point.”

Bob’s first appearance for United Way was in 2016 at the 75th birthday celebration for Curious George.

When Bob makes an appearance, Hickman said, he wears a different T-shirt. At appearances for PAWS, he wears a shirt saying “adopt,” urging people to adopt rescued animals. At United Way events, he wears a United Way-related shirt. At his appearance at the Christmas tree lighting ceremony at the Outlets at Vicksburg, Bob wore a shirt that said “free hugs,” something she said was popular with the children attending the event.

“Bob gets lot of attention. It’s nice. I get kind feel nervous about stuff sometimes, so being Bob kind of hides it. Nobody knows it’s me. I keep him in my car in case he’s needed. He does get a lot of attention when I wear my free hugs t-shirt.

“I hope he helps emphasize the cause he represents. I’ve kind of adopted him. Or maybe he’s adopted me.”