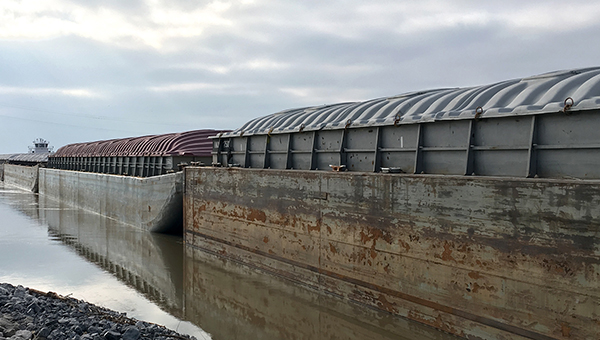 COST-EFFECTIVE: A group of river city mayors, including Vicksburg Mayor George Flaggs Jr., called on Congress and the Trump administration to spend $10 million to expand the use of waterways in the country to relieve congestion on the nation’s roads. Barges carry more cargo at less cost than tractor trailer traffic.

Mayor George Flaggs Jr. was part of delegation of mayors from the Mississippi River Cities & Towns initiative who met with members of Congress and administration officials to discuss issues affecting them and the Mississippi.

The organization is composed of 124 cities and towns bordering the Mississippi River that works develop a common voice to those who depend most upon the river and provide officials with mayors, to provide them with the ability to attract green jobs, move towards sustainable economies and achieve local environmental protection goals, and help protect and restore the Mississippi as a natural system that can support people and economies, and its ecosystem and wildlife.

“It’s a transition up there, and because it’s in a transition, some things are moving slow and some fast,” he said. “The good news is Vicksburg is at the table and at the place it needs, front and center, so I feel good about it.”

Among the items discussed were:

The program helps reduce the risk to cities and towns in the Mississippi Valley by providing money for preparation ahead of disasters.

The mayors are seeking an increase in funding for pre-disaster mitigation projects in the wake of increasing and more severe disasters such as Hurricane Katrina, Hurricane Isaac, severe flooding and droughts in the past 12 years. The group also wants the government to establish a resilience revolving loan fund bolster the grant program.

4 $10 million for the America’s marine highway program grant account to fund improvements to improve and expand the use of navigable waterways in the U.S. to relieve congestion on the nation’s roads.

According to information from the initiative, $1.7 trillion worth of U.S. goods moved through the nation’s ports. Of the 30 million containers that came to the U.S. in 2014, none moved up the Mississippi River.

According to statistics by the American Waterways Operators and the Waterways Council, 4 percent — about 604 million tons — of the total cargo moved inland during 2014, the most recent year for statistics, was moved by barge along the nation’s inland waterways. A 15-barge tow is equal to 1,050 tractor-trailer trucks, 216 rail cars and six locomotives.

Pablo Diaz remembers one of his first conversations with officials after arriving in Grenada. “I told them, ‘My job is... read more