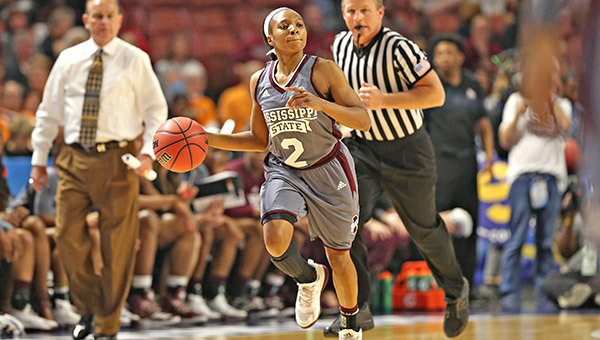 GREENVILLE, S.C. (AP) — A’ja Wilson believes No. 5 South Carolina proved it’s not only the best in the Southeastern Conference, but one of the best in the country and a major threat in the NCAA Tournament.

The Gamecocks won their third straight SEC tournament title behind Kaela Davis’ 23 points and Wilson’s dominant fourth quarter to rally past No. 6 Mississippi State 59-49 on Sunday. South Carolina (27-4) celebrated amidst the falling confetti. The Gamecocks understand, Wilson said, there are bigger goals still to chase.

“I think we really showed ourselves,” Wilson said. “We showed a good picture of what we do, how we are here at South Carolina.”

Wilson, the two-time SEC player of the year, is a big part of that. She had seven of her 15 points and eight of her nine rebounds in the final period as the Gamecocks rallied from 45-40 down to win their 10th straight over the Bulldogs (29-4).

South Carolina coach Dawn Staley, whose team likely heads to the NCAAs as a No. 1 seed, accepts that these Gamecocks will remain out of the national conversation about those programs capable of ending Connecticut’s try for a fifth straight NCAA title.

Mississippi State (29-4) closed within 50-49 on Roshunda Johnson’s bank shot with 4:42 left. The Bulldogs, however, would not score again in losing their second consecutive SEC tournament final to South Carolina.

Once more, that joy went to South Carolina.

Wilson, playing without injured post partner Alaina Coates, found her dominance in the final quarter. Along with her points, the SEC player of the year had eight of her nine rebounds and two of her four blocks in the period.

She was named the tournament’s MVP.

When it was over, Davis heaved the ball high into the air and the Gamecocks celebrated at midcourt to the cheers of a packed arena, located about two hours north of their campus.

Teaira McCowan had 15 points and 12 rebounds to lead Mississippi State. All-SEC first team selection Victoria Vivians had another disappointing performance for the Bulldogs, going 3-of-10 from the field for nine points. Vivians, who averaged 16.6 points a game this season, had a total of 24 points in their three games here.

“We are disappointed today,” Schaefer said. “We played really well for about 33 1/2 minutes. It was a heck of basketball game. We just felt like we didn’t execute down the stretch. Morgan (William) and Teaira (McCowan) really carried us offensively. They made some shots and competed.

“In a game like this, you really just want to go out there and lay it all on the line,” Schaefer added. “I think our kids did just that.”