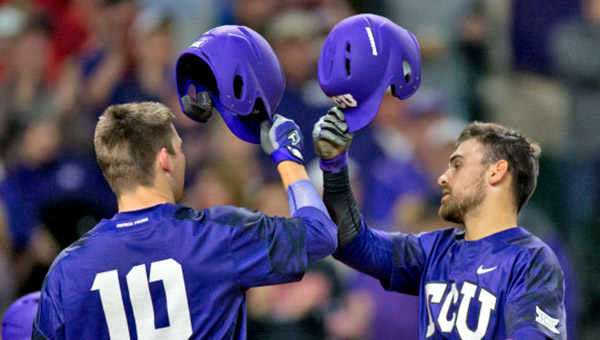 The Rebels scored three runs in the bottom of the eighth inning to make a game of it, but fell too far behind early on and lost 5-3 Sunday against TCU in the Shriners Hospitals for Children College Classic at Minute Maid Park in Houston.

Ole Miss (7-4) lost all three of its games in the weekend Classic against Texas-based Big 12 opponents. Worse, it scored a total of four runs and only had 15 hits.

The Rebels have lost four in a row overall after starting the season with a seven-game winning streak.
TCU (10-1) is ranked No. 1 in all of the major college baseball polls and won its sixth consecutive game.
TCU jumped out to an early lead with three runs in the second inning. Cam Warner had an RBI double and scored on a single by Zach Humphreys, and another run came in on a wild pitch.

Ryan Merrill hit a solo home run in the fourth inning, and Josh Watson an RBI single in the sixth to give the Horned Frogs a 5-0 lead.

Ole Miss finally got on the board in the eighth inning. Tate Blackman drove in the Rebels’ first run with an RBI single, and Colby Bortles belted a two-run home run to cut it to 5-3.

That was as close as the Rebels got. TCU got out of the inning without any more damage, and TCU closer Durbin Feltman retired the side in order in the ninth to finish it out.

Feltman earned his third save of the season. Jared Janczak started for the Horned Frogs and struck out 10 batters in 7 1/3 innings to get the win.

Ole Miss relievers Will Ethridge and Dallas Woolfolk combined to throw four innings of perfect relief. Ethridge struck out four in two innings, and Woolfolk struck out one.

At the plate, Blackman was 2-for-4 with an RBI and a run scored and Will Golsan had two hits.

Tanner Gardner hit a walk-off RBI single in the bottom of the ninth inning to give No. 10 Texas Tech (11-2) a victory over No. 2 LSU (9-3) in the Shriners Hospitals for Children College Classic.

Ryan Long homered for Texas Tech, while Gardner had two hits including a double.

Antoine Duplantis had two hits and two RBIs for LSU, which lost two of its three games against Texas-based Big 12 opponents during the weekend. The Tigers lost to No. 1 TCU on Friday and then beat Baylor on Saturday.