Pair of shootings sends victims to the hospital and police searching for suspects, information 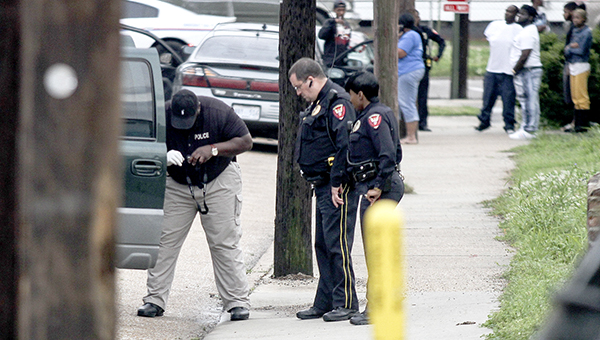 Investigators with the Vicksburg Police Department collect evidence at the scene of a shooting reported at the intersection near 1st North and South Streets. It was reported that a female was struck and transported to Merit Health River Region. (Courtland Wells/Vicksburg Post)

She said the man, who was not identified, was shot in the head and was in serious condition at University of Mississippi Medical Center. No charges have been filed.

The shooting was one of two occurring in the city Tuesday.

Williams said police received a call about 10:43 p.m. through Vicksburg-Warren 911 from a home on Buford Drive in the county that a man had been shot in the head.

“After further investigation, we learned the shooting occurred somewhere on (U.S.) 61 South,” she said. “We have a number of people detained, and we will have more information as the investigation progresses. We are trying to get to the bottom of this.”

Tuesday evening about 5 p.m., a woman was shot during a domestic argument near the intersection of First North and South Streets.

Williams said one person is in custody in connection with the 5 p.m. shooting, but no charges have been filed.

The woman was taken to Merit Health River Region Medical Center with what police termed as non-life threatening injures.

Information on her condition was unavailable.