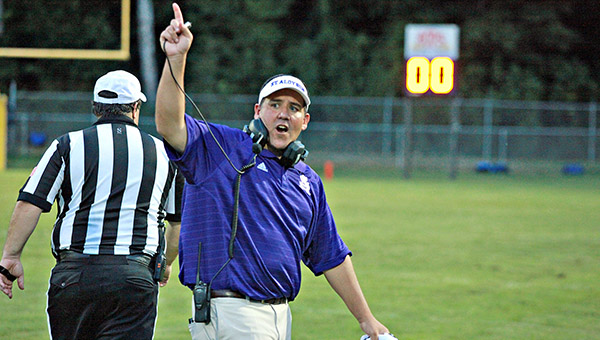 BJ Smithhart has found his next challenge.

Smithhart, who recently announced he was stepping down as St. Aloysius’ football coach after nine seasons, was hired as the head coach at West Lincoln High School on Monday. His hire was approved at the monthly meeting of the Lincoln County School District.

Smithhart originally applied for the West Lincoln job in December, but Justin Sawyer was hired instead. The 36-year-old Sawyer died Feb. 18 of an apparent heart attack.

“I did talk to them back in December, and it was somewhere that interested me,” Smithhart said. “It’s unfortunate that that happened to Coach Sawyer.”

Smithhart had a 54-54 record in nine seasons at St. Al, from 2008-16. He led the Flashes to the MHSAA Class 1A championship game in 2014 and the semifinals in 2013, as well as the District 3-AAA title in 2015 in their first season as a member of the Mississippi Association of Independent Schools.

He recently announced he was leaving St. Al to pursue coaching opportunities in Mississippi’s public school system. Because St. Al is a private school, Smithhart’s time there does not count toward his state retirement. Teachers become vested in the retirement plan after working in the public system for 25 years, and the 38-year-old wanted to get back in with enough working years left to reach that mark.

Smithhart said he had offers from several schools, but he and his wife Krystal liked the Brookhaven area and settled on the West Lincoln job. He plans to finish the school year at St. Al.

“The area is real nice. We like Brookhaven. It’s a school we can see our kids growing up in,” Smithhart said.

West Lincoln’s football team finished 2-8 last season. The MHSAA Class 2A program has only had one winning season in school history, when it finished 5-4 in 2012.

Smithhart, however, was optimistic about the situation he’s heading into.

“I think they’re on the upswing,” he said. “We definitely have some work to do. I think the program is in good shape.”