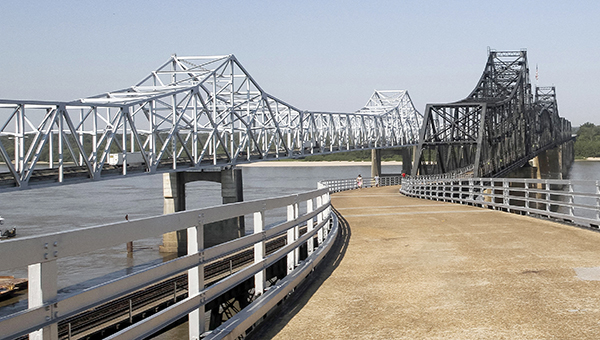 The U.S. Army Corps of Engineers Vicksburg District is upgrading its system on the Old U.S. 80 bridge to get and report Mississippi River stages for Vicksburg, the Warren County Board of Supervisors learned Monday.

Bridge superintendent Herman Smith discussed the system while presenting an agreement between the Vicksburg Bridge Commission and the Corps to allow Vicksburg District employees access to the bridge to install and maintain the system.

The county and the Corps signed the agreement Monday. Greg Raimondo, public information director for the Vicksburg District, said the work on the system should begin in about two weeks. He said the new system will send the stage information directly to a satellite that will then relay it to the district and other agencies.

Mike Warren, a hydrologic technician with the district, said the project involves upgrading the present equipment at the site and installing an antenna to send the readings to a satellite.

“Nothing else will be added to the unit,” he said.

“We’ll either use a 12-inch (long) antenna, or a 30-inch (long) Yagi antenna,” he said. A Yagi antenna is a directional antenna with several units mounted parallel in a line along a center pole.

Warren said the radar unit shoots a signal cone to the river surface to take the stage reading. Presently, the unit sends the reading to a relay by a radio signal, which sends a signal to a satellite. The relay station will be eliminated once the new equipment is installed.

Smith said the Corps installed the radar gauge on the Old U.S. 80 bridge tin 2005, “And they had a mechanical device in a shed under the I-20 bridge and for about 10 years after, they continued to use both of them,” he said.

The shed, Smith said, which held equipment to receive the radio signal from the radar gauge and relayed it to the satellite, was damaged in the 2011 flood, and the Corps has had trouble getting the signal to the satellite and to agencies like the National Oceanic and Atmospheric Administration.