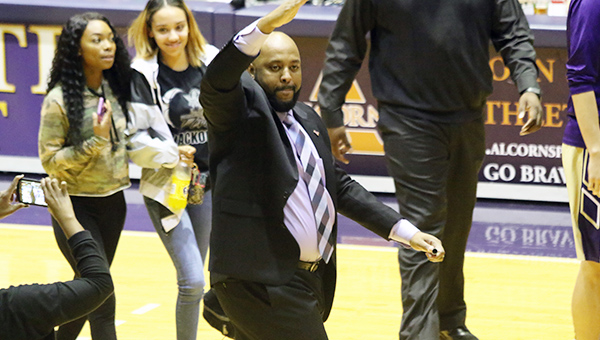 Alcorn State coach Montez Robinson celebrates as he walks off the floor following a 63-60 win over Mississippi Valley State in the first round of the Southwestern Athletic Conference Tournament on Tuesday. (Alcorn State Athletics)

LORMAN (AP) — It wasn’t pretty, but Alcorn State managed to stop its late-season slide and punch its ticket to Houston.

Denzel Dulin made a game-saving steal and hit two free throws with 5.2 seconds remaining as Alcorn State fended off Mississippi Valley State 63-60 in the opening round of the Southwestern Athletic Conference Tournament on Tuesday night.

Dulin finished with 13 points and A.J. Mosby led with 17 as second-seeded Alcorn (17-13) advanced to the quarterfinal round in Houston on Friday. The Braves will face No. 3 seed Southern.

“Denzel Dulin has been in here the last three days shooting free throws. He was actually in the gym here all day shooting free throws. So for the game to come down to him at the free throw line is only fitting,” Alcorn coach Montez Robinson said. “He also made a heck of a stop at the very end against Marcus Romain, who is one of the best players in the conference.”

Alcorn lost its last two regular-season games before squeaking out the win over seventh-seeded Mississippi Valley State (7-25). The Delta Devils won three in a row just to make the tournament and looked to keep going. Trailing by 10 with just under three minutes left, Romain turned an Alcorn turnover into two points and did it again with 1:51 left, scoring after an Isaac Williams steal and dish. Rashaan Surles hit a 3 and Romain a layup as the Delta Devils cut it to 61-60 with 45 seconds left.

Romain had the ball after yet another Braves turnover, but Dulin stepped up to steal and hit the free throws.
Romain led Mississippi Valley State with 29 points and Surles scored 17.

Alcorn committed 18 turnovers that led to 16 points for Valley. Its last field goal was a jumper by Mosby with 4:19 remaining that made it 59-46. After that, the Braves went 0-for-4 from the field and committed four turnovers. Dulin went 4-for-4 from the foul line in the same stretch to keep the Braves just far enough ahead to hang on.

Reginal Johnson added 15 points and nine rebounds for the Braves, while Marquis Vance had eight points and eight rebounds.

“I thought our guys really took care of the ball for the most part, but we started to put ourselves in bad situations down the line. We’ve got to do a better job of handling the pressure and not turning the ball over,” Robinson said.

LaQuentin Collins hit a 3, Sam added a jumper, and Southern rallied from a 34-25 halftime deficit to a 42-41 lead with 13:02 to play. After two lead changes, Sam hit a go-ahead free throw and Southern led 62-58 on Chris Thomas’ free throws with 1:31 to go. Sam hit five more from the line down the stretch to seal it.