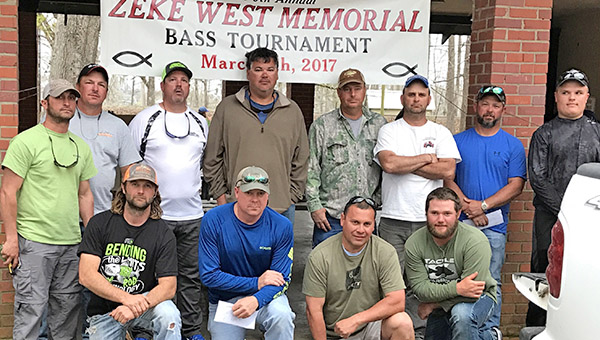 More than 75 anglers competed in the the 9th Annual Zeke West Memorial Scholarship Bass Tournament March 4 at Lake Bruin State Park. Gary West and Todd Moore finished in first place with a total catch of 17.95 pounds. Richard Dickey and Mark Lively finished second with 16.55 pounds. Brett Pruett and Blake Deron were third, with 15.35 pounds. Matt Ingram and Garrett Folds came in fourth place with 15.06 pounds, and William Hatton and Stacy Boggs were fifth with 15.06 pounds. The big bass was caught by Billy Jo Higgins and Johnny Beauchamp, with a 4.67-pound lunker. (Submitted to The Vicksburg Post)

The Purks YMCA will host an American Red Cross lifeguarding class March 27 to April 7. The 30-hour class will meet from 6 to 8:45 p.m. each weeknight for two weeks.

People taking the class must be at least 15 years old or turning 15 no later than April 7, 2017. Candidates must also pass a strength and endurance test prior to the class, which includes a 300-yard swim and other timed drills.

The cost of the course is $150 for YMCA members and $175 for non-members. The course will be taught by veteran American Red Cross instructors Susan and Bob Athow, and Sylvia Gurtowski.

Southern Miss will host three volleyball camps for youth and high school players on its Hattiesburg campus this summer.

The youth camp is for middle school students grades 4-8. This camp will focus on beginner volleyball skills for individuals and teams, and includes a tournament.

The Vicksburg Parks and Recreation Department will hold its annual ASA umpire meeting on March 8, at 6:30 p.m. at the Parks and Rec office at 100 Army Navy Drive. The meeting is mandatory for all umpires planning to work in the VGSA youth fast-pitch and adult slow-pitch softball leagues this season.

In addition, scorekeepers and umpires are needed for the upcoming softball and baseball seasons. Employment forms can be picked up at the Parks and Recreation office. For more information, call Joseph Graves at 601-634-4514.

The scholarships are given to one senior at each of Warren County’s four high schools, and both athletes and non-athletes are eligible. Students must submit an application form, transcript, an essay, and a list of the activties they have been involved in since ninth grade.