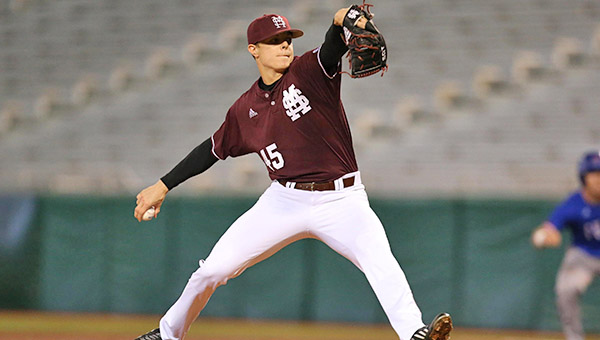 STARKVILLE — Mississippi State once again felt the sting of living on the edge.

The Bulldogs’ bullpen was torched for three runs in the last two innings, and they lost 3-2 to Louisiana Tech Tuesday at Dudy Noble Field.

It was Mississippi State’s fifth consecutive one-run game. It has lost four of them.

Three relievers kept Louisiana Tech (12-1) off the board until the eighth, when it came crashing down.

Former Hinds Community College stars Jonathan Washam and Marshall Boggs got the visiting Bulldogs started with singles. Sean Ullrich then doubled to right field with two outs to bring both of them in and tie the game at 2.

After Mississippi State went down in order in the bottom of the eighth, Louisiana Tech took advantage of a defensive meltdown.

With two runners on and one out, Washam struck out but MSU catcher Dalton Skelton dropped the third strike. Skelton’s throw to first hit Washam in the back, allowing the go-ahead run to score.

“I’ll tell you what, this team perseveres,” Louisiana Tech coach Lane Burroughs said. “We have talked about it over and over again, throughout the early part of this season. There is no panic in the dugout. I felt like our guys were never too worried. They wanted this game. After last season, and having their season end on this field against this opponent, they really wanted it.”

Louisiana Tech closer Nate Harris retired MSU in order in the ninth for his sixth save.

Brant Blaylock homered for Mississippi State in the third inning, and Cody Brown added another solo shot in the fifth. The homestanding Bulldogs only had two other hits, however, and didn’t leave anyone on base. They hit into one double play, and Jake Mangum was picked off of first to end the third inning.

“Our starting pitching has gotten better,” Cannizaro said. “We have to find some answers on the back end. We really navigated the game well for the first seven innings against a very good offensive team. What I do know is this team will come out Wednesday and have a great practice. We will get better at the fundamentals of the game and look forward to playing again Friday.”

Kyle Watson hit a solo home run in the second inning for the game’s only run, and Ole Miss (8-4) snapped a four-game losing streak by beating Georgia State (6-5) 1-0 in the opener of a two-game midweek series in Oxford on Tuesday.

Pitching for the first time in 10 days, Stokes earned his second six-out save of the year. The trio of Rebel arms recorded 10 strikeouts on the night.

Ole Miss only had three hits in the game — Watson’s home run and singles by Nick Fortes and Bryce Blaum.
Brandon Baker (0-2) took the loss for Georgia State, despite a strong effort. He allowed only the one run and two hits in 5 2/3 innings.

Ole Miss and Georgia State will finish the two-game series Wednesday at 3 p.m.

LORMAN (AP) — It wasn’t pretty, but Alcorn State managed to stop its late-season slide and punch its ticket to... read more