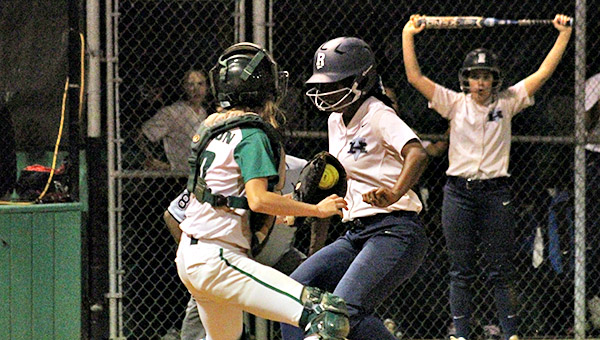 Vicksburg High catcher Gracie Emerson turns to tag Ridgeland’s Syndi Stevens on a plate at the plate in the third inning Wednesday. Stevens was out, but Ridgeland went on to win 15-13as Stevens went 2-for-5 with a double and three RBIs. (Ernest Bowker/The Vicksburg Post)

Nobody walked away from Wednesday’s softball game between Ridgeland and Vicksburg High without a few bruises, but Ridgeland was able to wear them with a little more pride.

The Lady Titans squandered most of a 10-run lead before holding on to beat Vicksburg 15-13 in a wild, wacky game at the Softball Swamp. A total of 17 batters were hit by pitches in the game — 11 for Ridgeland and six for VHS — and the teams combined for nine errors.

“The ball was flying at people a lot,” Vicksburg coach Brian Ellis said with a chuckle.

Syndi Stevens went 2-for-5 with a double and three RBIs for Ridgeland (2-5, 1-0 Division 4-5A), Madison Bennett drove in three runs, and Emmaryn Cunningham had a pair of RBI singles.

Ridgeland scored in each of the first three innings, including a nine-run outburst in the top of the third, to take a 13-3 lead. Vicksburg pitcher Jamie Ward, an eighth-grader making her first varsity start in the circle, plunked six batters in those three innings. Four of them came around to score, and another forced in a run.

Ward played in place of the Missy Gators’ regular pitcher, Kayla Foster, who was out with the flu.

Ward was replaced by Abby Hasty in the third inning, but Hasty didn’t do much better. She gave up three runs in a little over an inning and hit two batters herself. That led Ellis to bring Ward back to the mound, and her second go-round went a lot better.

Ward escaped a jam in the fourth inning without giving up a run, and then held the Lady Titans scoreless in the fifth and sixth. She did hit three more batters and gave up a pair of runs in the seventh inning that turned out to be the difference in the game, but pitched well enough to settle the game down and open the door for the Missy Gators to get back in it.

“She’s an eighth-grader and she just got thrown to the wolves. Not just in a varsity game, but a district game,” Ellis said of Ward. “She stayed in there. She stayed happy-go-lucky. (Shortstop) Bethany (Martin) was a team leader and helped her out a lot by encouraging her. It was awesome for her to be able to do something like that.”

Even though Ridgeland was building a big lead, the Missy Gators (2-2, 0-1) were generating some scoring chances. They had runners on base in every inning and scored in the second, third, fourth and sixth to stave off the run rule.

Then, trailing 13-7 heading into the bottom of the seventh inning, they really got rolling.

Ridgeland reliever Jadan Brice was brought in to get some work with a big lead, but hit two batters and walked one while another reached on an error. Starting pitcher Sydnee Pollock returned to the mound and hit a batter to force in a run, gave up an RBI single to McKenzie Thompson, and threw two wild pitches.

Two runs scored on dropped third strikes, but Vicksburg wound up trading runs for outs at that point. It scored six runs in the seventh inning to cut it to 15-13, but never got the tying run to the plate before Markayla Chiles popped out to first to end the game.

When it was all said and done, the Missy Gators had scored 13 runs on only six hits. Ellis said he was proud of the team’s fight, even if it came up short, and noted that because of run differential tiebreakers within the division the last-ditch rally wasn’t entirely in vain.

“I hated to lose that district game, but for the adversity we had to go through that was big for us to be able to compete like we did,” Ellis said. “We didn’t get down. We stayed in there, and then as the innings got down I kept telling them to look at the scoreboard. We were in this game. We could win this game. And we drug the game out, and their pitcher started throwing more and they had to pull her and we had opportunities at the end.”