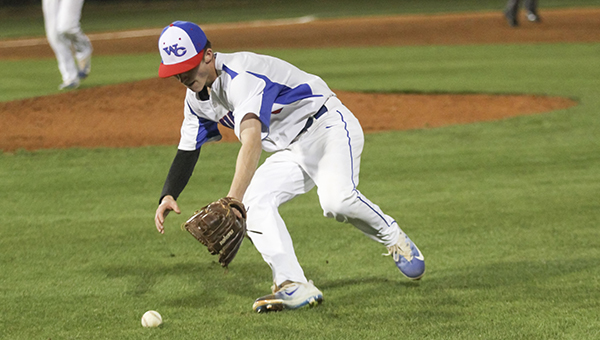 Warren Central pitcher Logan Stewart scoops up a bunt Wednesday against Murrah. Stewart allowed two runs in three innings as the Vikings rolled to a 13-2 victory in their Division 4-6A opener. (Courtland Wells/Vicksburg Post)

Sean Daily went 2-for-3 with a double, three RBIs and two runs scored, and pitchers Logan Stewart and Morgan Jarabica combined on a two-hitter as the Vikings routed Murrah 13-2 Wednesday night at Viking Field.

Murrah scored a run in the top of the first inning to take an early lead Wednesday, but the Vikings struck back in the bottom half for five of their own and never trailed after that. Daily delivered a two-run double to put WC ahead 2-1, and then scored on a single by Matthew Newcomb.

Tyler McRight and Brett Oldenburg also had RBI doubles in the inning to make it 5-1. Warren Central added four runs in the fourth inning and four more in the fifth to finish the game by the mercy rule.

Oldenburg finished with three RBIs, while Newcomb was 2-for-3 with one RBI and two runs scored. D.J. Lewis also drove in two runs. All nine starters either drove in a run or scored one.

Stewart started on the mound and pitched three innings. He allowed both of Murrah’s runs and hits, struck out five and walked none. Jarabica pitched the last two innings without giving up a hit, walked one batter and struck out three.

Wednesday’s game, which was moved back a day because of rain, marked the start of a busy week for Warren Central. It will play four games in four days — on the road Thursday and Friday against Ridgeland and Murrah, and then home Saturday afternoon against Pearl — heading into spring break.

James Trichell went 3-for-3 with a double, and also pitched two innings of scoreless relief, as St. Aloysius blasted Briarfield Academy 20-0 in the first half of a doubleheader.

Kieran Theriot and Landon Middleton each had two hits for St. Al, including a double. Wes Warnock also doubled. Tyler Breithaupt started on the mound and had six strikeouts in two innings.

In game two, the Flashes continued their roll and finished the sweep as they won 16-0.

Lane Hubbard struck out five batters in two innings on the mound, and his teammates backed him with 12 hits. Warnock had two hits, including a triple, Reed Bourne was 2-for-4, and Thomas Phillips went 3-for-4 with a double.

St. Al will next play Monday at 5:30 p.m., against Cleveland East Side at Bazinsky Field. It’s part of a three-day spring break tournament that will also include Vicksburg High, Porters Chapel Academy and five other teams.

Butler in line for big raise

After three seasons in the NFL, two Super Bowl championships and one Pro Bowl selection, Malcolm Butler is about to... read more