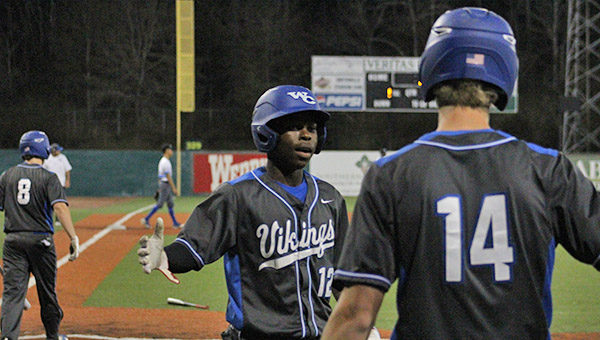 Warren Central’s Vantrel Reed (12) is congratulated by teammate Matthew Newcomb (14) after scoring a run in the first inning Friday against Murrah. Reed tripled twice at the plate, and threw four innings of no-hit ball on the mound as the Vikings won 12-1. (Ernest Bowker/The Vicksburg Post)

JACKSON — One sloppy inning defensively kept Warren Central from getting a shutout Friday night, but that was just about the only thing that went wrong.

Vantrel Reed and Christian Oakes combined on a five-inning no-hitter, D.J. Lewis drove in three runs, and the Vikings scored in every inning to earn an easy 12-1 run-rule victory over Murrah at Smith-Wills Stadium.

Warren Central (5-3, 2-0 Division 4-6A) run-ruled Murrah for the second time this week and won its 11th consecutive division game. WC outscored Murrah 25-3 in their two meetings this week.

“We want to win them all, but these are the ones we have to circle on the schedule and make sure we take care of business,” Warren Central coach Conner Douglas said. “And I’m happy we are back to competing like we are supposed to. We made some good adjustments at the plate. Pitching has been very strong for us most of the year.”

Reed pitched four innings, walked five batters and gave up one run — the result of a hit batter, two walks and three errors in the second inning — but was largely unhittable. Nine of the 12 outs he recorded came via a strikeout.

Oakes only needed six pitches to get through the fifth inning and complete the no-hitter.

In three starts this season, Reed has allowed no earned runs and struck out 17 batters over 13 2/3 innings.

Reed also had a big night at the plate. He tripled in the first inning and scored the Vikings’ first run on a double by Landon Stewart. He tripled again in the second inning to drive in a run.

Reed’s second triple was part of a three-run rally, and the Vikings tacked on five more in the third to take a 9-1 lead. Lewis had an RBI double in the third inning and finished 2-for-3 with a run scored and two stolen bases.
Brett Oldenburg, the No. 8 hitter in the lineup, also had a nice game. He went 2-for-3 with two RBIs and three runs scored.

“We made great adjustments this week and have taken a much better approach at the plate,” Douglas said. “There’s still a few things here and there we need to fix, but I’m very satisfied with the way we swung it. We have a healthy competition going between several guys right now. It’s fun to watch.”

Garrett Hutchins went 2-for-3 with a home run and two RBIs, Brayden Ray was 2-for-3 with a double and two runs scored, and Porters Chapel Academy routed Adams County Christian.

PCA drew six walks in the game, and all six runners came around to score. The Eagles also had nine hits, and every starter scored at least one run.

The Warren County Republican Executive Committee has qualified Alex Monsour as a candidate for the South Ward alderman’s seat. Its... read more