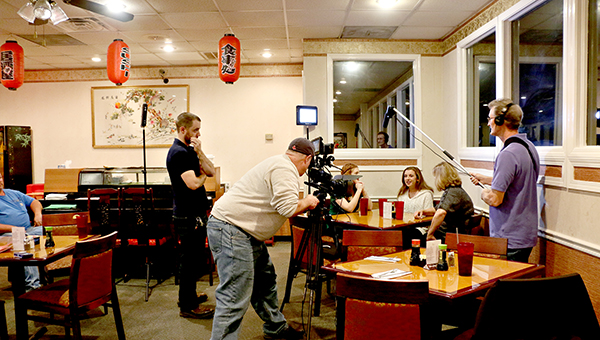 ACTION: Vicksburg Filmmaker Mike Gillis shoots a scene at See’s Restaurant for his latest production, “When I Loved You.” Gillis is the owner of Raintree Pictures. From left are David McInnis, Gillis, Dotti-Kate McInnis, Cassidy Lampkin, Glenda Arredondo and sound engineer Mike Robinson.

Vicksburg filmmaker Mike Gillis is at it again.

The owner of Raintree Pictures is currently filming his latest production, “When I Loved You.”

The film is a Christian movie based on a screenplay written by Gillis and deals with the awkwardness of young love and a young woman who loses her faith due to tragic events in her life.

Filming is being done at various locations in and around Warren County, Gillis said.

“It has been really fun, but being in the film has also required a lot of time and attention,” Lampkin said.

The Warren Central High School cross-country and soccer player also said some of the scenes in the film have hit very close to home.

“The film deals with some of the things that I have had to deal with,” Lampkin said.

Katie has to deal with the loss of someone she loved, “and it is just like some of the things I had to deal with when my brother died. It feels like Katie felt when I lost my brother,” she said.

“When I Loved You” is Gillis’ largest project to date, he said, with also the largest cast.

Others cast in significant roles include Dotti-Kate McInnis, Glenda Arrendondo, Tabitha Bert and Jai Dobson, all of who are from Vicksburg, and Randy Stroud, who is formerly from the River City, but now lives in Madison.

There are a total of 12 speaking parts in the film, Gillis said, in addition to extras that come in and “mill around.”

Gillis said his interest in filmmaking goes back to his days at WCHS when he was a member of the dancing/singing group, Total Sound.

Warren Central High School drama teacher Barbara Sizemore had asked Gillis if he would be interested in trying out for the newly organized group, he said, and after making the cut found out he enjoyed the stage.

In 1977, his love of the stage expanded into an interest in photography and then from there videography.

However, it wasn’t until about 10 years ago that making films took hold.

Gillis said he had been approached about shooting a drama a woman had put together, and after the film had been edited and the final version completed, he decided he wanted to be a filmmaker full time.

“So I got out of the private sector and started making films.”

Gillis’ last film, “Around The Next Corner,” which was shot at the Highway 61 Coffeehouse two years ago, was a finalist for best drama short at the Tupelo Film Festival.

Gillis said his films are based on real life situations with an objective to spread God’s message.

“If I can save one person I will feel complete.”

Gillis said after his last film a man emailed him and told him that he had seen himself in the film, and it had changed his life.

“I felt like my job was done,” Gillis said.

A premiere for “When I Loved You” is in the works, Gillis said, but the time and date have not yet been set.