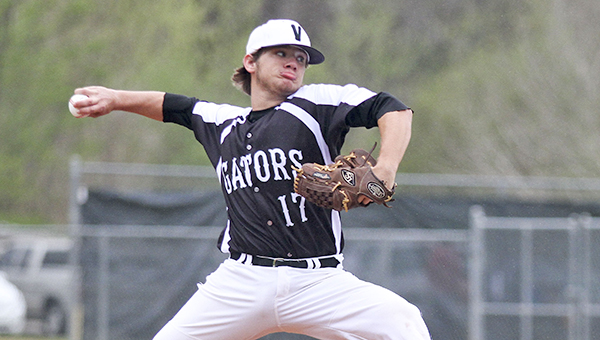 The Vicksburg Gators got ahead of the rain and Murrah on Saturday, but not a case of the defensive yips.
The Gators committed three errors in the top of the sixth inning, opening the floodgates for Murrah to score nine unearned runs, and lost 11-5 at Bazinsky Field.

Starting pitcher Chandler Luke allowed three runs, only one earned, in five innings for the Gators (1-5). He was forced off the mound and behind home plate, however, when backup catcher Branden Humphrey injured his hand. Luke is the starting catcher when he isn’t pitching.

Murrah took advantage of the pitching change and the defensive shuffle to get its offense going, and turned a two-run deficit into an 11-4 lead.

“We’ve got to learn how to close out some ballgames,” Vicksburg coach Derrick DeWald said. “Chandler pitched well. It’s just unfortunate we had to take out the catcher and move him back there. That’s two good outings we’ve gotten out of (Luke).”

Luke’s brother, Haden, had two hits and an RBI for Vicksburg, and Humphrey had a hit and an RBI before leaving the game.

Vicksburg will return to action Tuesday at 10 a.m., when it plays crosstown foe Porters Chapel Academy for the first time ever in a spring break tournament at Bazinsky Field.

St. Aloysius scored four runs in the top of the first inning to get the lead, and then blew it open with six runs in the fifth to earn an easy win over Franklin County.

Landon Middleton and Garrett Breithaupt split the pitching duties, and both were effective. Middleton allowed two runs, both unearned, in 3 2/3 innings. Breithaupt pitched the last 3 1/3 without giving up a run.

Together, Middleton and Breithaupt allowed only three hits and two walks. They only needed 89 pitches to make it through the game.

Warren Central finished a productive week with another excellent performance on the mound and another victory.

Aaron Greene, Caleb Sterling and Farmer Abendroth combined on a four-hit shutout, and the Vikings (6-3) won their third game in a row by beating Pearl.

During the three-game winning streak, Warren Central has allowed a total of three runs and six hits in 17 innings. This was its third shutout of the season.

Greene started on Saturday and allowed two hits and three walks, while striking out six in four innings. Sterling pitched two innings of shutout relief, and Abendroth worked the seventh.

Matthew Newcomb was the Vikings’ hitting star. He went 3-for-3 with a double, two RBIs and a run scored. He singled and scored on an error in the second inning, had an RBI single in the third, and an RBI double in the fifth.