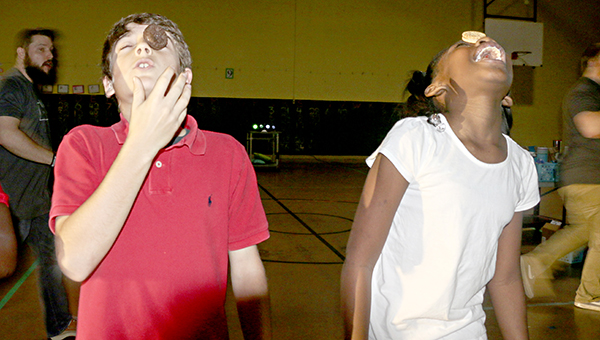 MINUTE TO WIN IT: Beechwood Elementary School students participate in the school’s Minute To Win It, Friday. The game-filled day was in conjunction with PBIS — Positive Behavior Interventions and Supports, which focuses on rewarding good behavior. Students who had demonstrated good behavior and who had not been written up for nine weeks were allowed to participate.

Beechwood Elementary School students worked hard for the past nine-weeks to earn a minute — a minute to win it that is.

On Friday, students who had not been written up for any behavior violations got to take part in the school’s version of the TV game show “Minute To Win It.”

“We do something different every nine weeks,” Schrader said, “but every spring we do minute to win it.”

About 500 students from pre-k to sixth-grade participated in the event that challenged competitors to complete deceptively simple games in 60 seconds or less.

“I think it is cool,” third grade student Kamaya Evans said as she cheered on her classmates that were competing.

Colton Key and Chandler Jackson, who are youth ministers at Crossway Church, served as the school’s game show hosts.

The high-energy duo pumped up the crowd following the explanations of how each game was to be played.

“I did it last year when I was in fourth grade,” Beechwood student Benjamin Runnels said, of being one of the students called to compete.

The fifth-grade student also added that having the chance to participate in the school’s PBIS events were a big incentive for good behavior.

Beechwood implemented PBIS in 2012, and the school in now a model site, principal Tamikia Billings said.

Becoming a model site means those who work with PBIS in the state of Mississippi come and observe the school to make sure things are done right, Schrader said, and the proactive approaches for rewarding good behavior are used throughout the year.

“Teachers do everything in their classrooms that combine with PBIS and positive behavior. Students are rewarded for positive behavior daily, which can help build intrinsic motivation in kids,” Billings said.

The school has already seen evidence that PBIS has been positive for Beechwood.

“We have seen decreases in student referrals, increases in academic achievements, increases in building effective relationships, and it has created a positive and conducive climate and culture for teaching and learning,” Billings said.