Mississippi State gets two wins on the diamond 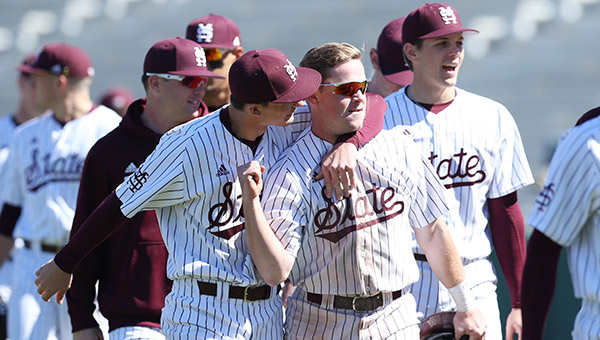 STARKVILLE — Mississippi State had a flair for the dramatic Sunday afternoon.

Brant Blaylock’s walk-off RBI single in the bottom of the ninth inning gave the Bulldogs a 5-4 win over Columbia in the first game of a split doubleheader at Dudy Noble Field.

In the second game, Brent Rooker homered to kick start a four-run eighth inning that propelled the Bulldogs to an 8-6 win over South Alabama and the Sunday sweep.

“So proud of our guys today,” Mississippi State coach Andy Cannizaro said. “It was a long day. We played 18 innings of outstanding baseball. College baseball games are hard to win. You have to beat the other team by playing smart, fundamentally sound baseball. We showed some good perseverance to do that.”

Against Columbia (0-5), Mississippi State let a 4-1 lead slip away in the eighth inning before rallying to win it in the ninth.

Cody Brown hit a leadoff triple and scored on Blaylock’s hit through the right side of a drawn-in infield.
Brown, who entered as a defensive replacement in the sixth inning, finished the game 2-for-2 with two runs scored and two RBIs. He had a two-run single in the bottom of the sixth.

Blaylock was 3-for-4 with two RBIs and a run scored. In addition to his game-winning hit, he had an RBI single in the sixth inning that put Mississippi State ahead 4-1.

“Brant has really come a long way in the last couple of weeks,” Cannizaro said. “He is really having some confident at-bats. He really had a big part in each of our scoring innings.”

The game with South Alabama (8-7) mirrored the first, although the winning rally came a little earlier.
Mississippi State (10-6) scored four runs in the sixth inning to take a 4-1 lead, but South Alabama got a solo home run by Will Luft and a two-run single by Travis Swaggerty to tie it in the seventh.

Swaggerty finished 3-for-3 with a home run and three RBIs.

Rooker led off the bottom of the eighth with a home run to put the Bulldogs back in front, 5-4, and ignite a big rally.

Two walks led to a two-run double by Hunter Stovall, and he scored on a single by Jake Mangum to make it 8-4.

South Alabama scored twice in the ninth without a hit — two batters were hit, two more walked, and Jared Barnes hit a sacrifice fly — to pull within 8-6.

Mangum moved from the outfield to the mound and finally extinguished the rally by getting Brendan Donovan to fly out to center for the final out.