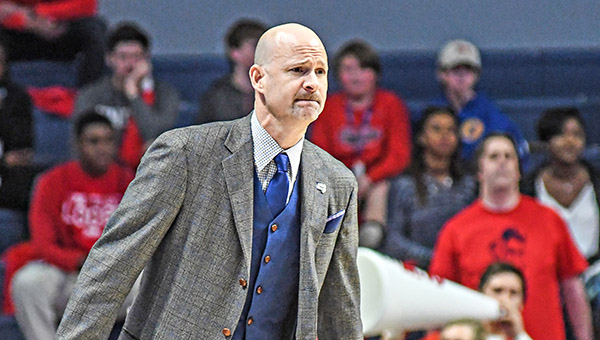 Ole Miss coach Andy Kennedy watches the game against Missouri in February. Ole Miss received a bid to the NIT on Sunday, and will go on the road to play Monmouth in a first-round game Tuesday night. (Bruce Newman/The Oxford Eagle)

OXFORD — Ole Miss basketball is back in the postseason.

The Rebels will play in the NIT as a No. 5 seed against No. 4 seed Monmouth Tuesday at 6 p.m. in West Long Branch, New Jersey. The winner will face No. 1 seed Syracuse or No. 8 seed UNC Greensboro in the second round.

Monmouth (27-6) wwon the Metro Atlantic Athletic Conference regular season championship but lost in the title game of the conference tournament.

Regular season champions who are left out of the NCAA Tournament gain automatic bids to the NIT.
Ole Miss coach Andy Kennedy hoped a deep run in the Southeastern Conference Tournament would give his team a chance for an NCAA at-large bid.

Following a home loss to Baylor on Jan. 28, the Rebels won eight of their next 11 before losing 73-72 to Arkansas in the SEC quarterfinals. Arkansas played for the tournament championship against Kentucky on Sunday, but lost 82-65.

Arkansas was one of five SEC teams to earn an NCAA Tournament bid, along with Kentucky, South Carolina, Florida and Vanderbilt.

Ole Miss will be playing in the NIT for the sixth time under Kennedy. The Rebels reached the semifinals in New York in 2008 and 2010 and last played in the NIT in 2012 when they lost at home to Illinois State in the first round.

The Rebels fell short in key games that could have helped them earn an NCAA bid. There were narrow losses to Creighton, Virginia Tech and Baylor. Those three teams combined for 73 wins, and Ole Miss had chances to win each game.

The Rebels, though, did not have a win against a team ranked in the RPI top 25 and were 2-9 against the RPI top 50.

They finished with an RPI of 75. They did not reach the NIT with 20 wins last season when their RPI was in the low 90s.

Mississippi State gets two wins on the diamond