Vicksburg among finalists for national recognition 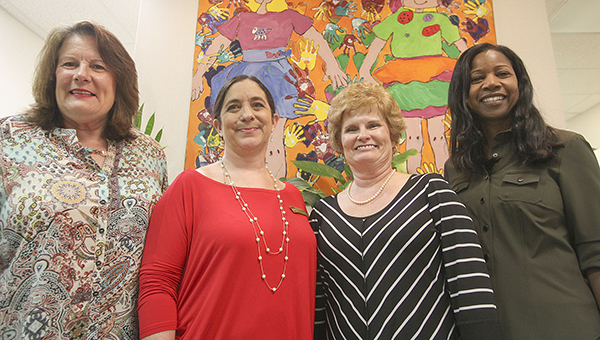 It was initially formed to help Vicksburg win national recognition for its quality of life and health and fitness programs.

But the four members of the Vicksburg Live Healthy Action Team say getting the city named a finalist for the prestigious Robert Wood Johnson Foundation Cultural of Health Prize is the first part of its plan to help develop and improve Vicksburg’s quality of life and the overall health and fitness of its citizens.

The group was notified March 7 that Vicksburg is one of 11 cities in the U.S. to be named a finalist for the award by the Robert Wood Johnson Foundation, which works to improve health and health care in the U.S.

And being a finalist for the Culture of Health Prize, member Linda Fondren said, “Is a major accomplishment.”

She is quick to point out, however, the award is not the work of the team, which also includes United Way of West Central Mississippi executive director Michele Connelly, city grants writer Marcia Weaver and former Vicksburg-Warren Chamber of Commerce executive director Jane Flowers.

“The cultural health prize, is not just about one person,” Fondren said. “It’s not about one program going on, it’s about what the entire city and county are doing to address health issues in our community.”

“It’s not something we did, other than just advocate for all the wonderful things that are happening here in Vicksburg,” Connelly said. “We were the vehicle of sharing the accomplishments of our entire community.”

The group formed about two years ago after Shape Up Mississippi, a nonprofit organization formed by Fondren, applied for prize.

“We did not win the prize; we only made it to the first phase of that,” she said.

But falling short had its advantage in the form of an offer from the Robert Wood Johnson Foundation for coaching, to help them apply for the prize in the future, and a $10,000 grant, which helped with other community programs.

“It was to accelerate our efforts in what we were trying to do, because they saw some things we needed to address,” Fondren said. “So we formed the team and we have been working together ever since. We were ready once again to share our accomplishments.”

When the team members heard Vicksburg was one of the finalists, Connelly said, “We celebrated; were very excited.”

What makes the city’s designation as a finalist and the award so prestigious, Flowers said, is the Robert Wood Johnson Foundation is the largest health foundation the U.S.

“They publish health data on every county in the United States and they look at the bigger picture of health and our health extends in how we work and how we play an how we live an what our community is about, so that’s what the Robert Wood Johnson Foundation was about, and it was so good for our community,” Fondren said.

The members, she said, assembled their knowledge of the opportunities in the city.

“We didn’t even know it was that great, so we are really excited about what we get to show about our accomplishments,” she said, adding the coaching they received helped them narrow their focus for their presentation to the foundation.

“It was amazing what could be done, because we didn’t ever work together in project,” Flowers said. “I didn’t know what I was getting into, but it was improving the quality of life, which is one of the chamber’s missions.”

“We knew ourselves that we had great assets here,” Fondren said. “We knew that we were doing better than the people in the community thought we were doing, but maybe it hasn’t been addressed to the point where we could put this out about our community … this gave us a great opportunity to showcase this.”

The application to the foundation highlighted four areas, or accomplishments:

4 The fitness and nutrition efforts of Shape Up Mississippi and Shape Up Vicksburg, to provide free health and fitness classes; efforts to encourage African-Americans to have a healthy lifestyle by promoting walking programs in the Vicksburg National Military Park and the “walk with a doc” program, a collaboration between Shape Up Mississippi, Merit Health River Region and Walk America, where doctors walked with participants and answered health-related questions.

The collaboration between Shape Up Mississippi, the city of Vicksburg, Alcorn State University and My Brother’s Keeper, a nonprofit organization that promotes health and wellness, to develop a community garden at the Vicksburg Municipal Airport.

4 The city of Vicksburg’s commitment improving health and wellness through the development of walking tracks, the installation of a skate park and collaboration with My Brother’s Keeper, to install a new walking track by the skate park and provide amenities at other walking trails and parks, city-sponsored youth sports programs and camps.

“We have a lot of resources here, and I think that one thing we’ve been able to do working as a team is to pool all of our resources together and say, ‘This is what we’re going to do; this is what we’ve already been doing, and we can build on that,” Weaver said. “We don’t have to start from scratch.”

4 The Leader in Me Program in the city’s public school system, which helps equip students with self-confidence and the skills they will need to be successful, and teaches them to be creative, set and meet goals, get along with people from different cultures and backgrounds, and how to resolve conflicts and solve problems.

Representatives from the Robert Wood Johnson Foundation will be in Vicksburg in either April or May to tour the city and observe its programs and activities in action.

If the city wins the prize, Fondren said, it means national recognition for Vicksburg.

“Other cities will come here to see what we’ve done,” she said.

But whether the city wins the Robert Wood Johnson Foundation prize or not, the Vicksburg Live Healthy Action Team members say they will continue promoting health and wellness programs in the community.

“We needed to work on some things, and United Way of West Central Mississippi is taking the lead on working hard to make sure we are measuring the success that is happening in our community,” Connelly said. “This relationship here will continue; there is no way we will allow it to stop.”

“We’re going to continue to work together on the health and well-being of this community,” Fondren said. We think we still have more things to address concerning moving our community forward, and we want to be able to work as a team with officials.”