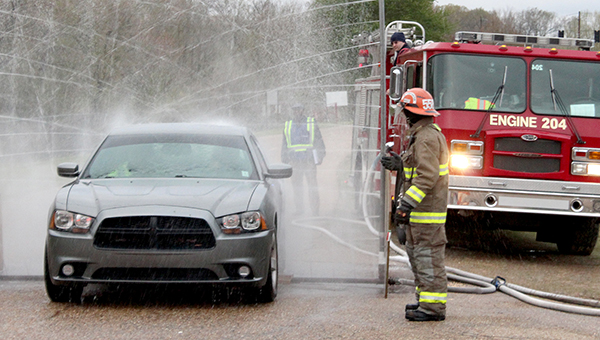 Warren County’s emergency workers were tested on their response to a nuclear emergency at Entergy’s Grand Gulf nuclear power plant during a mock release of nuclear contaminants from the plant.

“Claiborne County is the risk county in the event there is any kind of emergency involving Grand Gulf,” Warren County Emergency Management director John Elfer said. “If necessary, if the plant or the community needed to be evacuated because of a radiation concern, we would get a portion of their population.”

The drill, he said, involves a release of radioactive contaminated particles, such as dust, released from the plant. “We are not talking a situation like a nuclear bomb exploding,” he said.

The residents affected by the release, Elfer said, “Would be told when to evacuate, depending on the emergency level, which would require us to establish our emergency operations center and open the reception center at Warren Central (high school).

“We would receive that portion of the population, and we would monitor them for radiation contamination and if necessary, decontaminate them. If necessary, they would stay at Warren Central for a period for 48 to 72 hours.”

During the drill, “residents” coming to Warren Central first went through a car wash before stopping at a checkpoint, where passengers were asked to leave the vehicle and the cars were parked in a specified area. People where checked twice for contamination. Those who tested negative went directly to the reception center. Others went through a decontamination process that included a shower if needed.

All processes were monitored and graded by Mississippi Emergency Management Agency officials.

Elfer said the county volunteer fire departments and the Vicksburg Fire Department were in charge of running the monitoring and the decontamination area. The Red Cross and the Mississippi Department of Human Services would operate the reception center.

“Every two years the NRC requires that we exercise and demonstrate that we are able to perform those functions, and this is one of those out of sequence events.

He said a medical drill Tuesday involving Merit Health River Region will involve a an accident where ambulance responds to a contaminated, or potentially contaminated patient, and the patient is treated, packaged and taken to River Region.

Board of Mayor and Aldermen now face decision on…