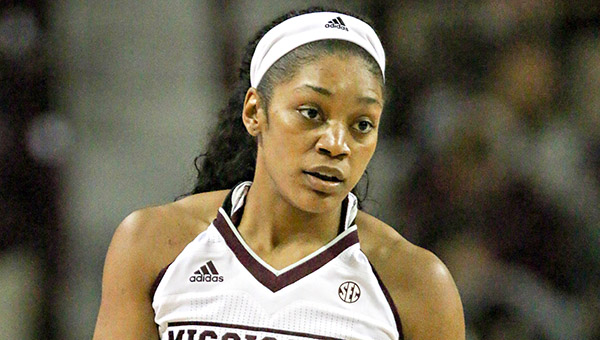 Victoria Vivians and Mississippi State earned a No. 2 seed in the Women’s NCAA Tournament and will host a regional in Starkville this weekend. The Bulldogs will play Troy in their first-round game Friday at 1:30 p.m. (Walter Frazier/For The Vicksburg Post)

STARKVILLE — For the second straight season, the NCAA Tournament will originate at Humphrey Coliseum for seventh-ranked Mississippi State.

The second-seeded Bulldogs have hosting privileges for the first two rounds of the tournament and also earned the highest seed in school history. MSU will take on No. 15 seed Troy Friday at 1:30 p.m. on ESPN2.

“It’s a reward and playing at home in front of our fans is amazing,” said MSU guard Dominique Dillingham. “We have the best fans in the country and they always help us and give us that extra energy that we need. We love playing in front of our fans.”

“You’ve got to be excited to be playing this time of year,” said MSU coach Vic Schaefer. “This is what you’ve worked for all year long. We’re in an awfully good region that’s tough. But this time of year, everybody’s good.”

Mississippi State is making its ninth NCAA Tournament appearance and is 9-8 all-time in the Big Dance. The Bulldogs advanced to the Sweet 16 last year before being eliminated by eventual national champion Connecticut, 98-38.

MSU is familiar with its first-round opponent, sporting an 11-2 record all-time against Troy. The Bulldogs have won the last four meetings, the last in 2012.

“Troy scores a lot of points, I know that about them,” Schaefer said. “We’ve played them before here. They upset UALR in the championship and we know how good UALR is because we played them earlier in the year. We’ve got our work cut out for us in the first game.”

TICKETS:
• Tickets for the Starkville Regional of the Women’s NCAA Tournament’s Starkville Regional are available online at hailstate.com/tickets, or by calling 1-888-463-2947.
• All-session tickets are $40 for adults and $18 for MSU students and children age 17 and under. Individual game tickets go on sale Thursday.