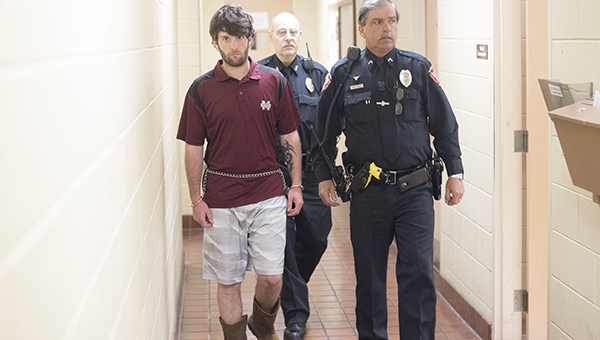 22-year-old Cody Coleson is escorted by Vicksburg Police officer Claude Billups after being charged with two counts of Kidnapping on Tuesday. Coleson allegedly assaulted two juvenile girls in a restroom at the Pemberton Square Mall on Saturday. Coleson is being held on a $250,000 bond.(Courtland Wells/Vicksburg Post)

A Vicksburg man remains in the Warren County Jail in lieu of $250,000 bond charged with two counts of attempted kidnapping involving a weekend incident at the Vicksburg Mall.

According to police reports, two older siblings allowed the girls to go to the mall restroom by themselves. Once inside the restroom, Coleson allegedly grabbed the children, put his hands over their mouths and attempted to push them into one of the stalls. The girls were able to break away from Coleson and leave the bathroom.

As they ran down the mall, Coleson chased them until he saw the older siblings, and left the mall. He was identified through video surveillance by police Investigator Otis Stamps. Coleson was arrested by Stamps and officers Jaclyn Noel and Eric Proctor. His bond was set Tuesday after an initial appearance in Municipal Court.