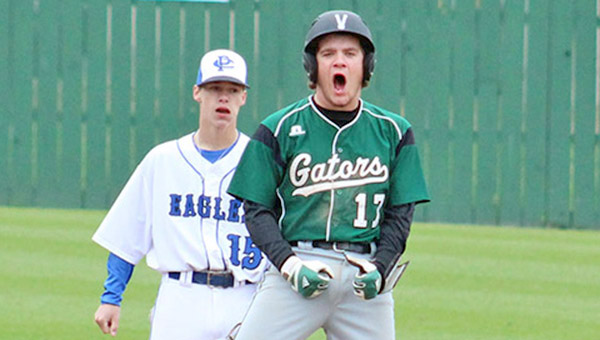 The Vicksburg Gators had several goals in mind coming into their spring break baseball tournament at Bazinsky Field, but the biggest was also the simplest — win.

They took a bumpy road to get there Tuesday, blowing an early lead and committing four errors, but got the job done by beating Porters Chapel Academy 14-7.

Haden Luke pitched a complete game for the Gators (2-5), who snapped a three-game losing streak. Alfred Barnes went 2-for-5 with a triple and five RBIs, Tyrese Wolfe drove in three runs and Chandler Luke drove in two.

“We’ve played really well for about five innings the two previous Saturdays. We just had one bad inning in both games. It’s just good to finally be able to close out a game,” Vicksburg coach Derrick DeWald said. “We’ve been very competitive this year. That’s something we’ve got to do this year. Being competitive and finishing out games is the key, and today we were able to finish out a game. It was an ugly win, but it was a win that we’ll take.”

Porters Chapel (7-7) finished its run at the tournament having lost two of its three games. In the two losses, to Vicksburg and Tri-County, the Eagles committed 11 errors, walked 15 batters and hit seven, and gave up 34 runs.

They also wasted leads in both games. Against Tri-County on Monday, they lost after leading 5-4 at the end of the first inning. Against Vicksburg, they rallied to lead 7-5 after letting a 3-0 lead slip away, but allowed the Gators to score nine unanswered runs to finish the game.

“They put three numbers on the scoreboard — runs, hits and errors. The first two were good. We had seven and eight. When the last one almost matches the first two, that’s never a good sign,” PCA coach Wade Patrick said. “We cannot make that many errors. We just cannot give a team extra outs and expect to win. Right now, that’s what we’re doing.”

DeWald and the Gators could sympathize with PCA’s penchant for blowing leads, but were happy to take advantage of the situation. The Gators had led in several of their losses only to have one bad inning mess everything up. This time, they kept the pressure on all the way through and found a way to finish.

Chandler Luke’s two-run double in the second inning keyed their first comeback from the 3-0 deficit. After PCA regained the lead, the Gators scored three times in the fourth inning, twice in the fifth, and four times in the sixth to pull comfortably ahead.

Wolfe drove in both runs in the fifth inning with a single. Barnes had the big blow in the sixth with his bases-clearing triple.

“We’ve been preaching since day one that we have to cut down on strikeouts. The first three games we struck out a lot. Since then we’ve made some adjustments at the plate during practice, and it’s poured over into a game,” DeWald said. The Gators struck out a total of four times Tuesday. “Today, we just cut down on strikeouts. We put the ball in play, and as a result we got a few hits and put a little pressure on them. Good things happen when you put the ball in play. We were able to get those key hits when runners were in scoring position.”

PCA put two runners on with two outs in the top of the seventh, but the Gators never flinched. Haden Luke got Wade Dickard to slice a foul fly ball down the right field line, and Branden Humphrey tracked it down in just in front of the bullpen for the final out.

Humphrey’s catch finished off an ugly gem for Luke. He gave up seven runs, but only one was earned. He only walked one batter, but hit four. Most importantly, he retired six batters in a row from the fifth through the seventh innings to give the Gators an opportunity to pull ahead.

DeWald said it also set the Gators up nicely for Wednesday, the final day of the three-day tournament. Vicksburg will play Rosa Fort at 12:30 p.m. and St. Aloysius at 3, and will have all of its best arms available to make it through the day.

“We hadn’t played defense behind him. In the three games he’s pitched, I think we’ve made 12 errors. That’s hard for a pitcher,” DeWald said. “For him to come out today, start, and go the whole seven innings is what we needed.”

Deserving of praise: Gillis an example of Vicksburg’s creative…