Flashes hang on to beat Vicksburg 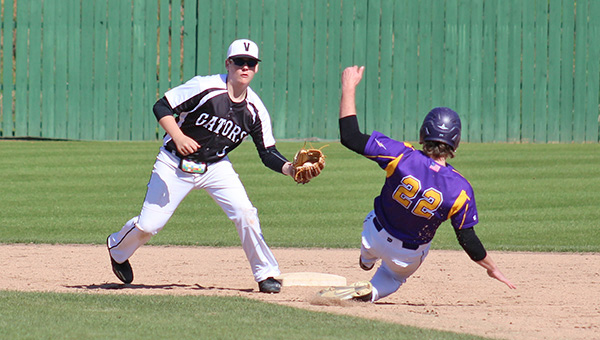 After combining for 58 runs in their first four games this week, Vicksburg High and St. Aloysius were probably due for a return to the mean and they got it in the final game of the Vicksburg Spring Break Tournament.

St. Al took advantage of a string of mistakes by Vicksburg to score three unearned runs in the fourth inning, and then held off a late comeback bid by the Gators to win 5-2 Wednesday at Bazinsky Field.

St. Al beat Vicksburg for the seventh time in eight meetings since 2013, and improved its record to 10-0 this season. It will begin its district schedule Tuesday at home against Riverfield Academy.

“I think we’re playing really good baseball from the standpoint of the guys are competing extremely hard,” St. Al coach Sid Naron said. “We still have to find a consistent lineup, but the biggest thing is the pitchers are throwing strikes and we’re defending it very well until today. We pressed a little bit on defense and had some routine plays we didn’t make. That’s something we have to clean up going into division play.”

The Gators and Flashes combined for seven runs and eight hits in the finale after each had won two games earlier in the tournament by a combined score of 58-14.

Garrett Breithaupt finished up with two innings of scoreless relief for St. Al (10-0).

“Landon, his last two outings, has not had his best stuff. He’s had a little dead arm and is working through some stuff. That was just a bulldog performance. He was kind of the same as Luke. It took him a while to find his breaking stuff, and when he did he was a lot better,” Naron said.

St. Al got out to a 2-0 lead with a pair of runs in the bottom of the first inning, but the difference in the game was the fourth.

Luke settled down after his rocky start to retire nine batters in a row, including the first two in the fourth inning. Then two easy ground balls resulted in errors, sandwiched around a single by Tyler Breithaupt, to bring in a run.

Luke ran the count on Garrett Breithaupt to no balls and two strikes, but the third pitch of the at-bat resulted in a passed ball that brought in another run. Jake Pierce then singled to bring in a third run.

The Gators committed another error when Luke sent a pickoff throw to second base into center field, but it did not lead to a run.

When the dust settled, St. Al had scored three runs to stretch its lead to 5-0 and gain some separation.
“Those are situations where we have to do a better job. We’ve got to make the play. It’s not from a lack of effort. We’ve just got to make the plays,” Vicksburg coach Derrick DeWald said. “I think our kids are putting a little more pressure on themselves, and I, myself and my staff have to find a way to take the pressure off. We’re going to have to do that in practice. Simulating game-like situations and game speed, and hopefully it will slow down for them and they can start making those plays.”

The bad inning has become a trademark of Vicksburg’s losses, but it was able to limit the damage and stay in the game. Luke retired seven of the last eight batters he faced.

Meanwhile, the Gators finally got things going at the plate. Gage Ederington reached on an error to lead off the fifth inning and eventually scored on a sacrifice fly. Tyrese Wolfe did the same in the sixth, except he scored on another error, to cut it to 5-2.

Then, in the seventh, the Gators loaded the bases with two outs and managed to get Luke — their best hitter — to the plate. Luke had singled twice for two of the Gators’ three hits in the game, but Garrett Breithaupt got him to chase a high fastball for strike three to end the game.

“The pitch before I struck out, they threw a curveball in the dirt. Then it seemed like they threw a fastball that grew wings and just flew up on me,” Luke said.

Naron said he had a lot of confidence in Breithaupt to get the job done.

“I liked the matchup, even before. I didn’t think it would come back around to (Luke), but if it did I knew I would want Garrett on the mound just because it’s a totally different look than Landon. He’s a tough hitter to pitch to,” Naron said. “Sometimes in that situation you find the best hitter at the plate, and we were able to get him out.”

Although his team lost, DeWald was hardly upset about the way the tournament played out. The Gators beat Porters Chapel Academy 14-7 on Tuesday and Rosa Fort 18-0 earlier Wednesday to earn a pair of much-needed wins.

Even against St. Al, they managed to minimize the damage from the awful fourth inning and regroup to give themselves a chance to win. All of those things, DeWald said, are signs of growth for a program trying to rebuild.

Vicksburg hasn’t finished with a winning record since 2012. With the two wins this week, it is now only one short of matching last year’s total.

“I’m proud of my team. We went 2-2 from Saturday to Wednesday. We’re right where we need to be. We’re competing. We scrapped and got the bases loaded with our best hitter up and unfortunately he went down swinging. I’m not disappointed,” DeWald said. “We’re 3-6, and in six of the nine we’ve been really competitive. It just goes back to we’ve got to find a way to make the plays when it matters. The effort is there, and it’s going to come. We’re knocking on the door, and that’s what we want as a program.”