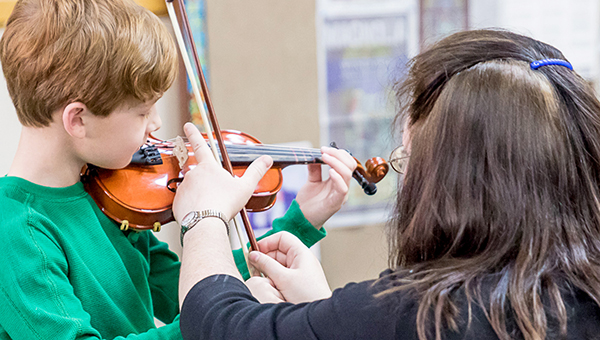 HANDS-ON LESSON: Mera Hall gives instruction to violin student Evan Asher during a master class workshop. Hall, who is a graduate of Southern Methodist University, served as a clinician for the workshop that was offered to Church of the Holy Trinity Conservatory of Fine Arts students in February.

For the past two years students from the Church of the Holy Trinity Conservatory of Fine Arts have had the opportunity to perform for trained clinicians.

Instead of a mid-year recital, administrative director of the conservatory Dorothy Brasfield said students participate in master classes where instructors evaluated their performances.

Seventeen–year-old guitar student Lera Rowell said she preferred doing masters classes to a recital, because the environment was much more relaxed.

“I prefer this because you don’t perform in front of a lot of people,” Rowell said.

During the master classes, students are divided into classrooms by the type of instrument they are studying, Rowell said, and a clinician would listen to a student perform and then give feedback.

“My sister Luba and I played solos and duets for Mr. David so he could see how well we could play,” Rowell said, “and he also suggested ways we could improve.”

In addition to evaluating the students, Rowell said Cox also introduced them to a looper, which is described as a device that records short passages and plays them back in a repeating loop.

“It is certainly different than a recital,” Gates said.

“The idea of a recital is to get you prepared for playing in public, but a master class is only with other students and is not as much about playing for an audience,” he said.

Gates plays the violin, and Mera Hall, who is a graduate of Southern Methodist University, served as the clinician for the stringed instruments.

“She was so good. She knew I was prepared,” Gates said, but she also realized I was nervous, so suggested some tips on how to relax.”

Gates said not only did he feel he benefitted from Hall’s suggestions she gave him, but he also learned some additional pointers from the comments she gave the other stringed students.

Others serving as clinicians for the master classes that were held in February included Lynn Weems, who is a retired music educator. She served as the voice clinician and Larry Rigby, a former state supervisor of music and keyboard artist, worked with the piano students.

More than 65 people participated in the master classes, Brasfield said and added that the day had turned out great.

“I’ve never known teachers in Vicksburg to offer master classes,” Gates said, and Vicksburg is fortunate to have the conservatory and the leadership of Dorothy Brasfield.