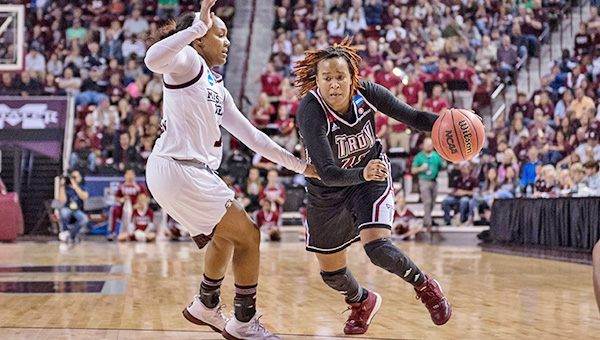 STARKVILLE (AP) — Vic Schaefer has been searching for a way to jolt Mississippi State out of its late-season funk, so in the first round of the NCAA Tournament the coach did something drastic.

Star veterans Victoria Vivians, Dominique Dillingham and Chinwe Okorie were banished to the bench. Role players like Blair Schaefer, Roshunda Johnson and Ketara Chapel were promoted to the starting lineup.

At least for one day, the shake-up worked.

“You’ve got to find a way to keep an edge,” Vic Schaefer said. “This is an important time of year. This is serious. There are a lot of people who have a lot invested in you.”

The coach was coy about his reasoning for the surprising lineup switch. He never said definitively if the moves were disciplinary or if he was just trying to mix things up.

Mississippi State (30-4) used a 29-6 run in the second quarter to erase any doubt about the outcome. Schaefer was the Bulldogs’ unlikely star, making 6 of 9 shots, including 4 of 7 from 3-point range.

“My shots were just falling,” Blair Schaefer said. “I’ve been in the gym and my teammates give me a lot of confidence.”

The second-seeded Bulldogs largely thrived with the unorthodox starting lineup, and Vivians was excellent off the bench. The first-team All-Southeastern Conference guard scored 13 points — including a buzzer-beating 3-pointer at the end of the second quarter — and grabbed six rebounds in 16 minutes of action.

Mississippi State shot 12 of 22 (54.5 percent) from 3-point range and outrebounded Troy 61-48. Teaira McCowan, who also earned her first start of the season, led the Bulldogs with 13 rebounds.

“There’s just some things that have to be done,” Vic Schaefer said. “It’s bigger than the game. So it never crossed my mind to do anything but what happened today. As far as the results, I was pleased with everyone who played today.”

Banks and the team’s leading scorer Caitlyn Ramirez fought foul trouble throughout the game, which hampered the Trojans’ ability to keep things close.

“It’s a first-class team that we lost to today,” Troy coach Chanda Rigby said. “But I think there were some factors that caused the margin to be as large as it was.”