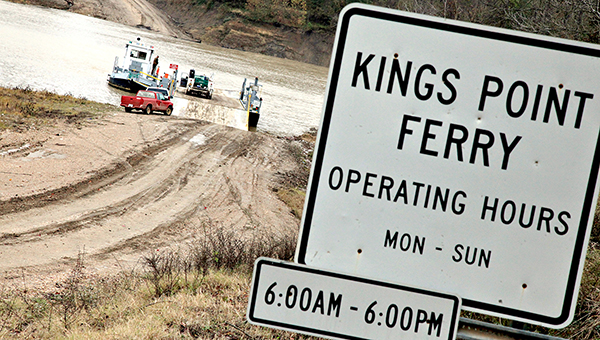 Warren County supervisors are going to make another try to fix the Kings Point Ferry.

The supervisors Monday are expected to open bids to repair the ferry, which is the only public access to the Kings Point area since construction of the Yazoo Diversion Canal in 1903 cut it off from the mainland of Warren County.

The island is made up mostly of hunting camps and timber farming. The ferry runs daily from 6 a.m. to 6 p.m. carrying hunters and workers across the canal.
“The ferry is operating,” Board of Supervisors president Richard George said. “We had to dry dock it for a little bit to let the prospective bidders check out the undercarriage.”

Part of the problem, George said, is the amount of time the ferry is out of the water for service.

The board in August rescinded a $249,725 contract with Big River Shipbuilders after learning the amount of time necessary to make the parts for the ferry would keep it out of the water during most of the island’s peak seasons.

“It’s just a unique situation,” George said. “We need for it to be repaired and to utilize the funds, so we have to be concerned how long and when it’s out of service, so it’s not easy.

“The peak use is obviously deer season and turkey season, and peak fishing season — it is more important then than other times of the year, and of course high water affects it.”

The present boat was purchased for about $600,000 in June 2005. A new motor financed with federal highway money was to be installed in 2015. The ferry was damaged in February 2006 when a ramp on the ferry broke away and sank in the canal when the vessel pulled away from Kings Point Island after dropping off a vehicle.