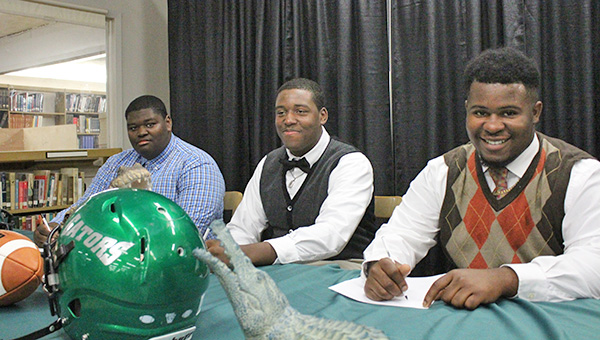 Vicksburg High football players, from left, Khris Watts, Kordell Watts and Marquail Gilchristpose for a picture at a recent college signing ceremony. Gilchrist accepted an offer to walk on at Mississippi Delta Community College. The Watts brothers are both headed to Jones County Junior College, Khris as a manager and Kordell as a player. (Ernest Bowker/The Vicksburg Post)

Vicksburg High’s offensive line didn’t have a catchy nickname like the “Hogs,” or even a modest one like the “Big Guys.”

Mostly, you can just call them “College Men.”

A third, Kenya Cobbs, signed with Arkansas-Pine Bluff in February. A fourth, Khris Watts, accepted an offer to be a manager at Jones County and will join his twin brother Kordell there next season.
It’s quite the resumé for a group that often toiled in obscurity while other players racked up yards and touchdowns.

“This year’s class, with the offensive line, we had four seniors and three of them are going to school. Two of them are on full scholarships,” Vicksburg head coach Marcus Rogers said. “I think it’s a testament to our assistant coaches, especially Shaun Archer and Lorenzo Breland who worked with those guys every day. Any time you can send three offensive linemen to college in one year, it’s a testament to where your program is headed.”

Gilchrist is headed to Mississippi Delta as a preferred walk-on. He will not receive a scholarship, but did say coaches had promised him the starting center’s job. Between having an opportunity to play and the rural setting of the school, Gilchrist said he liked what Mississippi Delta had to offer.

“Their offensive line coach said he liked the dog in me and said I’d have the starting position at center,” Gilchrist said. “It was something I was hoping for.”

The Watts brothers will head to Jones County together — Kordell as a player and Khris as a team manager.
Kordell had some offers from other junior colleges prior to signing day in early February, but “miscommunications” between the family and coaches led to a delay in taking one of them.

By the time the dust settled, Jones County was the only offer still standing. Luckily, it was a good one. Jones County finished 6-3 last season.

“There was some miscommunication with the coaches. It got crazy. But we went to Jones, and it felt like that was the place for us,” said Kordell Watts, who plays right tackle. “They treated us like family and said they were going to take care of me and my brother. We get to play football for an extra two years.”

The Watts brothers are among several Vicksburg High players that signed with Jones during this recruiting season. Defensive back Devontay Knight and wide receiver Raheem Moore also signed there.

“I get to go to college with my brother, and meet some new brothers,” Kordell Watts said.

A day after it was shut out for the first time this season, Warren Central’s baseball team woke up in... read more