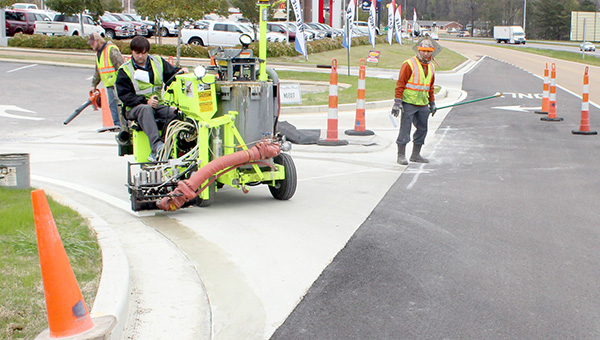 FINISHING TOUCHES: An employee for Traffic Control Products of Pearl lays striping along the curb near the entrance to River Hills Bank, east of the Wisconsin connector road intersection with North Frontage Road Thursday. The striping is one of the remaining requirements from the Mississippi Department of Transportation before it will approve the road for opening.

After months of delays and problems, the Wisconsin Connector Road opened Saturday morning.

“We’re opening it at 9 a.m.,” Mayor George Flaggs said Friday. “This will be a soft opening. We’ll have a ribbon cutting at a later date.”

The connector road runs between the River Hills Bank property and the site of the Cannon Honda and Cannon Toyota dealerships that are being built west of the bank to connect North Frontage with Wisconsin Avenue.

It had been completed in February, but the opening was delayed when the Mississippi Department of Highways refused to approve the road’s intersection with North Frontage Road, which is a state road.

City public works director Garnet Van Norman said a meeting between representatives for the contractor, Dirt Works, project engineer Neel-Shaffer and MDOT officials resolved the problems, which he said have been corrected.

He said MDOT had three issues: curb striping, a moveable island at the entrance to River Hills Bank, and replace the stop sign, which did not meet MDOT’s standards.

A moveable island, Van Norman said, is one that will not damage tires if a car runs over it. The island at the bank entrance is small and flat, and its sides are at an angle to allow cars to safely roll over it.

Late Thursday morning, a crew from subcontractor Traffic Control Products of Pearl were striping the bank parking lot entrance and along the curb on the connector road.

“Once the state approves the striping, we’ll be ready to open it,” Flaggs said.

Plans for the road began in 2014 after a decision by the city’s Planning and Zoning Commission to rezone a 22-acre tract along North Frontage owned by JEBCO LLC, the parent company for Blackburn Motors, from C-4 commercial to planned use development, which opened the way for the road.

A planned use development, or PUD, designation allows light industrial operations, clearing the way for the city to apply for the MDA loan.

The Board of Mayor and Aldermen awarded the contract to Dirt Works in April with an expected completion date in September, but weather and a problem with the soil in one area of the project site forced the deadline to be pushed back.

The city also had to reach agreement with River Hills Bank to repair construction damage to its parking lot before it could get the final permit from MDOT.

In October, a problem with an existing sewer line from the former Battlefield Mall, which once occupied the site, resulted in the board approving a change order to allow Dirt Works to install a conflict box in a section of the road to resolve the problem.

The board in December sought an extension through March on the $1.3 million Mississippi Development Authority CAP loan to build the road.