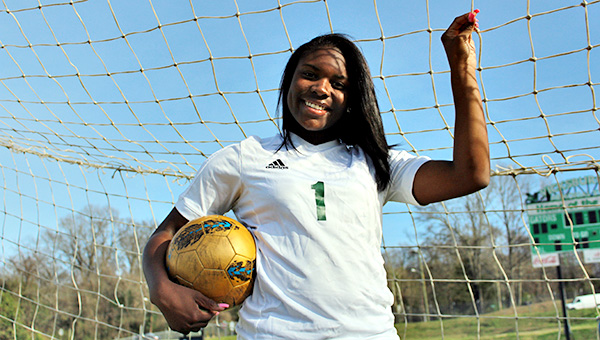 Vicksburg’s Banks made a statement in her senior season

When Mikayla Banks missed out on winning the Vicksburg Post girls soccer Player of the Year award in 2016, she was a bit upset. The missing award was a donut hole on her stellar resumé, and spoiled her goal of winning it four years in a row.

All that was left for Banks to do was come back, have another big year and reclaim what’s hers.

Banks scored 46 goals this season — an average of three per game — while helping the Missy Gators win their third division championship in four seasons. The senior was an easy choice for the Post’s Player of the Year award, which she also took home for the third time in four years.

“I was mad at myself because I wanted to get four Players of the Year and be the first to do it. Now I only tied it. Every time I think about it, I get sad. But there’s other records to be broken, so I can’t get too sad about that,” Banks said.

Banks is only the second player to win the girls’ Player of the Year award three times since it was introduced in 1999, and the third to even win it twice. Vicksburg’s Tabitha Hayden won it in 2010 and 2013, and Brandi Parker won it three years in a row from 2002-04.

Being recognized as Warren County’s top soccer player is only one way Banks was chasing Parker through history this season. Banks was also pursuing a couple of Parker’s longstanding scoring records.

When Parker graduated in 2004, she held the state records for goals in a single season and a career with 41 and 178, respectively. Banks was determined to beat those marks and wound up getting one out of two. She broke the single-season record but came up well short of the career mark, finishing with 152 in six seasons as a starter.

Parker’s single-season state record had been surpassed over the past dozen years, but still stood as a school record until Banks bettered it.

“I tried so hard this year to get everything I could ever get. I wanted to be first in everything. That was my attitude going in,” Banks said. “But I’m still proud of myself for where I am now.”

Banks’ totals are impressive enough, but become even more so with a look behind the numbers. For most of the last few seasons she was the Missy Gators’ primary scoring threat and often drew double- and triple-team coverage from the defense. She also missed a number of games for various reasons.

Nearly half of Vicksburg’s 2015-16 season was wiped out by sanctions from an on-field brawl against Murrah. Several games this season were rained out or forfeited. Division rival Canton forfeited two games in the last two weeks of the season.

In all, Vicksburg had nearly a dozen games wiped off the schedule and not made up over the past two seasons.
“With so many games being canceled, it was frustrating,” Banks said. “Sometimes games were canceled for unnecessary reasons.”

Although she didn’t claim the career scoring record, Banks said she was happy with her place in history within Vicksburg High’s soccer program. With her stellar senior season, she took her place among some of the best to play the sport in Warren County.

“I would hope that if anybody brings up soccer around the community, they would think of me. People give me compliments and I don’t even know them half the time,” Banks said with a laugh, when talking about her legacy. “I just want to thank all of my supporters, the people that came out and watched our games, my teammates, my parents (Michael and Michelle Banks) and God.”