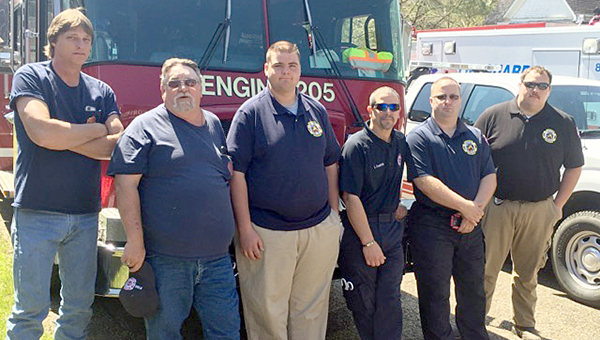 Warren County firefighters were in Sumrall Sunday to attend the funerals of two Lamar County volunteer firefighters who were killed by a hit and run driver as they were assisting law enforcement officers at the scene of a wreck.

“We’ve come down here to show our support for the family and the community in their time of sorrow,” said Stan Collins, an engineer with the Northeast Volunteer Fire Department.

“This something we do here in Mississippi to show support, whether it’s firefighters or police officers; we want to back the badge,” Collins said. “We want the people and the family know we are behind them.”

Atkins said attending funerals like the one Sunday are a normal practice for firefighters. “The family and the community appreciate seeing the support,” he said.

According to sheriff’s office reports, Sumrall volunteer firefighters Clinton Alvin Beasley, 80, and Loretta Ann Sykes, 53, were directing traffic at a wreck on Mississippi 589 at Oloh Road when they were hit by a driver who fled the scene. Both were pronounced dead at the scene by Lamar County Coroner Cody Creel.

A Sumrall man, Brandon Chance Eaton, 31, was later arrested and charged with hit-and-run and causing death. Authorities said the vehicle driven by Eaton was southbound on Mississippi 589 when it veered onto Oloh Road and struck the firefighters. It was later stopped and Eaton was taken into custody.