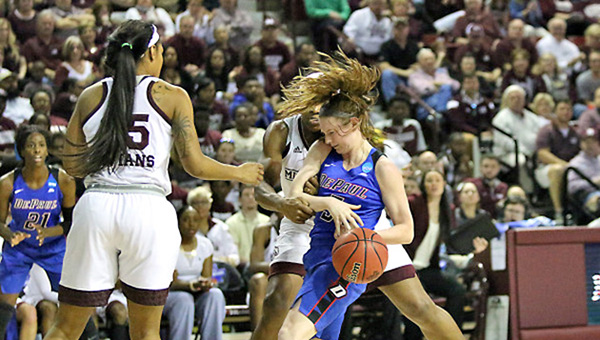 DePaul’s Lauren Prochaska (5) is hit as she dribbles into the lane against Mississippi State’s Victoria Vivians, left, in Sunday’s NCAA Tournament game in Starkville. (DePaul Athletics)

STARKVILLE (AP) — Mississippi State’s role players have become stars and the stars are often role players. Bulldogs’ coach Vic Schaefer saw a 29-win team that was struggling on offense going into the NCAA Women’s Tournament and blew up the playing rotation in mid-March.

The results, at least so far, have been fantastic.

Blair Schaefer scored 18 points, Jazzmun Holmes added 14 and Mississippi State pushed past DePaul 92-71 on Sunday in the second round of the NCAA Tournament.

Schaefer and Holmes were two who rarely played at times during January and February. Now they’re the two main reasons Mississippi State is going to the Sweet 16 for the second straight season.

Blair Schaefer has scored 39 points in two tournament games after scoring just 36 in the previous 16 games combined. She was 6-of-12 from the field on Sunday, including 4-of-8 from 3-point range.

Dominique Dillingham, who had started 19 straight games before the NCAA Tournament and is now coming off the bench, said no one is questioning their coach’s logic. Dillingham added 10 points and two steals on Sunday.

“He’s not crazy,” Dillingham said. “I think we have 10 starters. Anyone could start. We’re really deep.”
Second-seeded Mississippi State used a 14-0 run in the middle of the third quarter to turn a tight game into a 61-43 advantage.

DePaul, the seven seed, scored the next seven points to cut the lead to 61-50 by the end of the third quarter, but Mississippi State responded with the first eight points of the fourth quarter to put the game out of reach.
Six Mississippi State players scored in double figures. Victoria Vivians, Chinwe Okorie and Breanna Richardson all scored 12 points.

“We executed some really good stuff today,” Vic Schaefer said. “I mean really good stuff. Our kids really did a good job of attacking and doing some things offensively that we haven’t done all year.”
“Hopefully we’re getting hot at the right time. That’s what this time of year is all about.”

Mississippi State (31-4) used its unorthodox starting lineup for the second straight game, with usual role players like Schaefer, Ketara Chapel and Roshunda Johnson in the first five instead of Vivians, Dillingham and Okorie.

The strategy more or less worked, though the Bulldogs’ early lead quickly evaporated and a tight first half emerged. Mississippi State got a defensive stop on the final play of the second quarter to take a 38-37 advantage into halftime.

DePaul (27-8) was led by Jessica January, who scored 18 points. Brooke Schulte added 16.
The Blue Demons’ fast-paced offense was effective until the third quarter when the shots stopped falling. That’s when the Bulldogs were able to exploit their height advantage — they had a 48-26 rebounding advantage — and put together a big second-half push.

“If you quick shoot and miss, and don’t defend and rebound, you’re putting together a recipe for disaster,” DePaul coach Doug Bruno said.

Mississippi State will play either Oklahoma or Washington Friday in the Sweet 16 in Oklahoma City. Oklahoma and Washington play a second-round game Monday night.