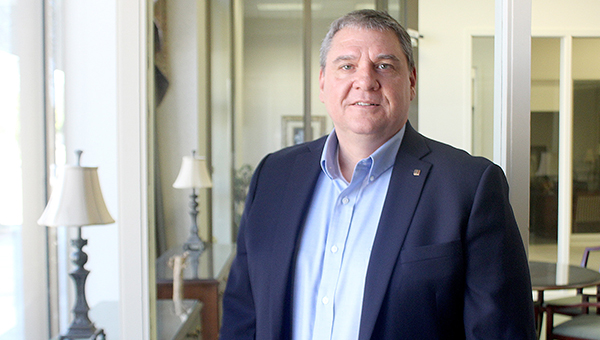 David Cox considers himself a behind the scenes worker when it comes to his community volunteer activities.

One could call David Cox a “quiet volunteer.”

“I’m really a behind the scenes kind of guy,” he said as he sat in his office at BancorpSouth’s main branch downtown.

He stays busy in the background, serving on both the United Way of West Central Mississippi and Salvation Army boards, plays in his church’s praise band, and is treasurer for the Vicksburg Paddlers, which puts on the annual Bluz Cruz kayak and canoe race in early spring.

A graduate of Ole Miss, Cox went from graduation into banking, and then to United Way.

“I started with United Way shortly after coming back to Vicksburg about 1992-93,” he said. “Toni Lanford (Ferguson) was the director. I grew up with her youngest son, John, so I was at Lanford house a lot.

“Toni was like a second mom, so when I came back into the banking business, she asked me to get involved rather quickly. Of course, there was no way I was going to say no to Toni.”

Cox’s first exposure to United Way was a six-year tenure with the allocations committee, which he said was a good place to learn the “nuts and bolts” about how United Way functions. At some point during his time on the committee, he was named to the United Way Board of Directors, and served as chairman in 2005, “The year Katrina hit, and once that year was up, they put me out to pasture for a while.”

He returned to United Way in 2016, serving on the community impact committee, the new designation for the allocations committee on which he previously served. He’s now back on the board.

He also serves as auditor for the community impact committee.

“Bankers tend to get pulled into treasurer positions a lot, just because we deal with numbers and we deal with financial statements on a regular basis,” he said. “I’ve served as treasurer of the Big Blue Band Boosters while my daughter was a member of the band, treasurer for the chamber of commerce for a year, and Riverfest treasurer in the 1990s.”

Besides serving as chamber treasurer, he was also a chamber ambassador. “I went to a lot of ribbon cutting ceremonies.”

Cox’s introduction to the Salvation Army was as a member of the board.

“They had a lot of turnover on their board and were looking for people to get involved. I knew several of the board members there and they asked me to join their board, which I did in 2015. I serve with them on the finance committee, and then sometime last year, Danny Jones stepped down as the longtime chairman of that board, and they elected me chairman of that board.”

The board, he said, oversees the operation of the agency.

“Really, we’re there for support and guidance,” Cox said. “The major, Steve Welch, came on board last year, and he and his wife Mary really do run the place. We’re really rather in an advisory role to bounce ideas off of and just help them. I’m still learning a lot about the Salvation Army.

When he’s not working with United Way or the Salvation Army, Cox plays guitar in the praise band at Highland Baptist.

“We practice Sunday mornings at 8 and Wednesday evenings and perform for Sunday services,” he said. “I guitar, sometimes bass; whatever they need. That’s the limit of my repertoire, guitar and bass.”

“I’m not a paddler, I’m not a kayaker,” Cox said of his involvement with the Vicksburg Paddlers. “A lot of my friends that I grew up with are, and they’re the ones that really kind of formed this organization to put this event (Bluz Cruz) on.

“I enjoy doing it, just to work on a project with them, and that race, they’ve raised a good bit of money for Service Over Self. They do it because they love kayaking, and they use that love to try and help people.”

Although he doesn’t paddle, Cost has been on the water for Bluz Cruz.

“I’ve survived it three times in a small kayak, tiny on that big river, and the first time I did it, I was surprised, because I have always had a fear of the river, especially here in Vicksburg on that big bend and with the Yazoo merging into it, it can be very turbulent.

“That race starts at the Madison Parish (La.) Port, and the river north of here is very calm, if the weather’s calm, you would think you’re on a lake. It can be very calm and peaceful. It’s a good way to spend a few hours. It takes me three hours to do a race. The winner does it in two.”

He said he enjoys the volunteer work and interacting people, “And I’ve really enjoyed working with United Way over the years.”

What attracted him to the organization, he said, was United Way’s global view of the community. “Historically, the United Way was known more as a fundraiser more than anything else, and that has changed gradually over the years. The emphasis today is really about gathering resources in the community in such a way that we can make a lasting change in people’s lives.

“We’ve got some great agencies that work here in the community on specific areas, but United Way had more of a global approach. They have my attention.”

Warren County firefighters were in Sumrall Sunday to attend the funerals of two Lamar County volunteer firefighters who were killed... read more