City to address landslide at park 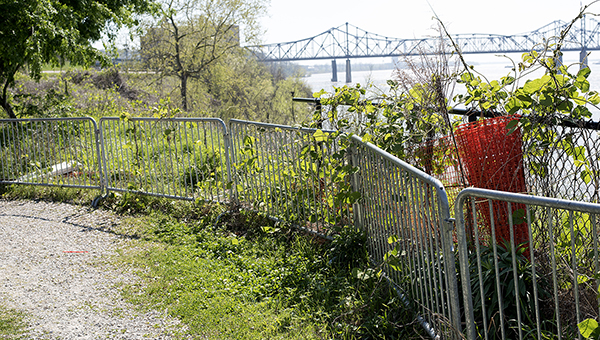 The Board of Mayor and Aldermen are taking the lead in repairing a slide at Riverfront Park.

The board Monday approved moving forward to pay for the engineering and work to correct the problem, which was first discovered almost two years ago.

“We’ve been going back and forth trying to wait on all the parties to get ready to proceed with whatever needs to be done,” South Ward Alderman Willis Thompson said. “At this point, we need to get moving with some design work to go ahead and get the work in place to continue with improvements to that park. The longer we wait, the worse the problem’s going to get.”
Thompson said the board needs to take over the project “and if we have to, bill the county whatever is needed to do the project. I don’t think we have the time to wait. I think it’s incumbent on this board to do whatever needs to be done, and I’m asking we go ahead and get moving.”

He said the city has plans to make improvements at the park. It doesn’t make sense to make the changes, he said, it the park has an erosion problem that could threaten the changes.

Riverfront park is one of the most used parks in the city. It is operated jointly by the city and the county, which share the cost of maintenance and repairs. The city has already allocated its $150,000 share of the repair project’s estimated $300,000 cost. The county is considering including its half as part of a bond issue to help repair the park and other county buildings.

“I think he’s dead-on; he’s right,” he said. “We’ve got the money and safety’s a priority, and the longer we wait, the more it’s going to cost us.”

North Ward Alderman Michael Mayfield said the river is close to getting into a high water period.

“It can only get worse by the day, now,” he said, adding the board will have to move quickly.

“Once the high water hits, that’s going to limit your time and what you can do,” he said.

Public works director Garnet Van Norman said Burns Cooley Dennis Inc. of Jackson, the consulting engineers hired to examine the problem have recommended a solution, which involves removing a section of dirt from the top of the slide, reducing pressure on the soil, and stabilizing the area, but Stantec, the county engineers, still have to prepare plans and specifications, and the project has to be advertized for bids.

Board attorney Nancy Thomas told the board it will need a contract with Stantec to allow them to do the design and specifications for the city.

Riverfront Park is located on a bluff overlooking the Mississippi River off South Washington Street, south of Ameristar Casino.

A section of the bluff on the south end of the park began slowly sliding off the bank in April 2015, taking part of the park’s perimeter fence and walking trail, and threatening a playground area and its equipment. The slide forced officials to close off the area.