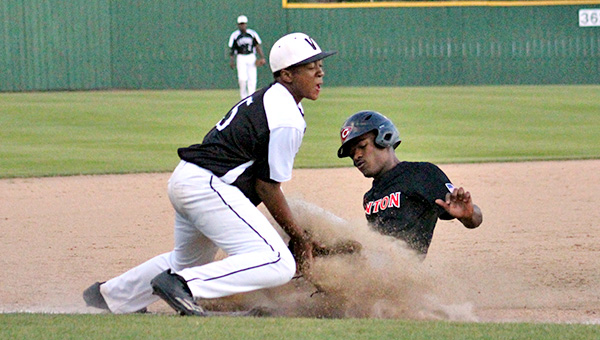 The scoreboard had, mercifully, been turned off and its contents started fading into memory when Derrick DeWald finally caught his breath and took time to assess the carnage he’d witnessed over the previous two hours.

Ever the optimist, Vicksburg High’s baseball coach tried not to focus on the fact his team committed eight errors. Or walked six batters and gave up 14 stolen bases. Or that it didn’t even put a ball in play in four innings in a 16-1 run-rule defeat against Clinton Monday night.

Instead, DeWald noted, there was another, more important game less than 24 hours away that offered the chance for redemption and hope.

“The beauty about baseball is we get to come back tomorrow and play another game,” DeWald said. “So we’re going to flush this out of our system. I guess the only good thing is maybe we got it out of our system. So hopefully tomorrow we’ll show up ready to play an important district game.”

Turning an eye toward Tuesday’s division game at Ridgeland was a shrewd move for DeWald and the Gators (3-7), who probably would like to pretend Monday’s game at Bazinsky Field against Clinton (8-5) never happened.

Clinton had 13 stolen bases in the first three innings as it built up a 9-0 lead, and added one more before coach Trave Hopkins started holding runners early in the fourth inning. Leadoff hitter Reggie Landing had four steals and scored three runs.

The steals helped the Arrows build a lead and keep pressure on the Gators until their bats got going. Clinton only had three hits in the first two innings, but drew four walks and took advantage of the steals and three VHS errors to move in front 6-0.

Clinton had been averaging about three steals per game. It had 10 stolen bases in a game against Seminary earlier this season.

“It’s normal for us to steal bags. Not that many. But that’s one of our strengths is running,” Hopkins said. “The pitcher was a little slower to the plate, and we’re aggressive anyway.”

DeWald said some of the steals were squarely on the shoulders of the Gators themselves. A failure to hold runners at first base and bad throws to second and third created opportunities for the Arrows to tear up the basepaths.

“We had some throws that were not accurate by our catcher, and then they were stealing sometimes off our pitcher. So it was a combination of both. That’s something we’ve got to fix,” DeWald said. “They’re really the only team that’s done that to us. They’re good at what they do. They put pressure on you. You just have to tip your hat to them.”

As eye-popping as Clinton’s stolen base total was, it was far from the most bizarre stat of the night. That belonged to Vicksburg, which managed to score a run without putting a ball in play all night.
Clinton pitcher Walker Burchfield threw a four-inning no-hitter and recorded 11 of the 12 outs via strikeout. He also hit two batters and walked one.

Burchfield started the third inning by hitting Chris Farrish and walking Branden Humphrey. He then struck out Alfred Barnes, but the last pitch was in the dirt and dropped by catcher Gates Pee.

Pee threw to third in an attempt to throw out Barnes as both runners tried to advance. The throw was low and skipped away down the left field line, allowing Farrish to score. Humphrey moved up to second base, but was picked off by Pee for the second out — and the only one in the game that wasn’t a strikeout.

“I didn’t know it until Coach Hop said something. I felt like I was going to come out here and dominate, and I did,” Burchfield said. “It’s weird, for the defense for sure. They get out there and get lazy on me. They get bored with all that. But I’m glad they stuck it out there and cheered me on, and it was a good team win.”

Clinton tacked on seven runs in the fourth inning as it batted around. Colby Collier had a two-run double, Adam Moncure had a bases-clearing triple, and Dee Baker a two-run single for the Arrows.

“They’re a good team, but you can’t give a team extra outs. We had 11 errors,” DeWald said, referencing the total on the scoreboard that was slightly higher than the actual total. “And then you throw in 13, 14 stolen bases, and it just equals a disaster like it was tonight. But the good thing is we get to wake up tomorrow. It’s a new day and we get to play another game tomorrow. Hopefully we’ll be ready to play and we got this out of our system.”