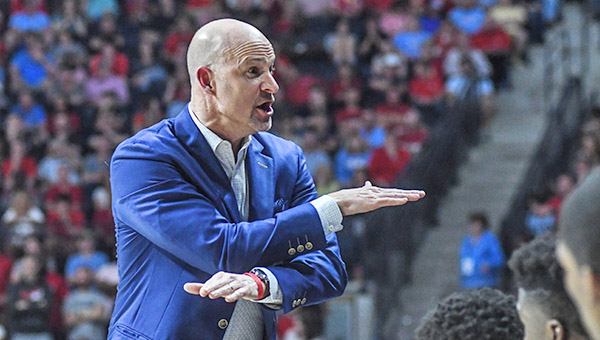 OXFORD — The Rebels will never know if they could have made it there.
Ole Miss couldn’t make it out of an NIT quarterfinal home game, its season ending one step shy of New York in a 74-66 loss to Georgia Tech Tuesday night.

Ole Miss previously reached the NIT semifinals twice, in 2008 and 2010 under coach Andy Kennedy.
Former Memphis coach Josh Pastner improved the Yellow Jackets to 20-15 and won against Ole Miss for the first time in three tries. One of his losses was an NIT second-round game at the Rebels’ old Tad Smith Coliseum.

Ole Miss concludes its season at 22-14, winning at least 20 games for the ninth time in 11 seasons under Kennedy.

Georgia Tech will play either Cal State Bakersfield or Texas-Arlington next week at Madison Square Garden.
Ben Lammers, Tech’s 6-foot-10 center, hurt the Rebels inside with 20 points on 9-for-11 shooting and eight blocked shots.

“Lammers is their best player,” Kennedy said. “Their zone made us settle a little bit. Some of it’s fools’ gold, because we made those shots against Syracuse, 15 3s. We kind of fell in love with it. Guys who were making them two days ago were not making them tonight, so then we drive it, and Lammers has eight blocked shots.”

Ole Miss never led but was four points back with 1:37 left after Terence Davis took a feed from Sebastian Saiz and drove the lane for a monstrous dunk.

Tech’s Josh Okogie got a back door cut and missed a dunk but was fouled by Saiz. Okogie hit both free throws, and the Rebels turned it over on the other end. That put Ole Miss in fouling mode.

“We led from wire to wire. That wasn’t easy to do in a place like this,” Pastner said. “To get to where we want to go from a good team to a great team was to have a big road win. That was today.”

The 3-point shooting that propelled the Rebels’ road wins at Monmouth and Syracuse failed them before a sellout crowd at The Pavilion.

Burnett, Cullen Neal and Rasheed Brooks, the Rebels’ top 3-point shooters, were a combined 0-for-9 in the first half. Ole Miss was a collective 2-for-13 in the half. Tech led by as many as 14 points and went to halftime with a 39-30 advantage.

The Jackets beat the Rebels down the floor much of the first half. The Rebels had only five turnovers, but Tech cashed in and converted them into 11 points.

The close looks and open 3s had Tech shooting more than 60 percent much of the half before settling in at 53.3 percent.