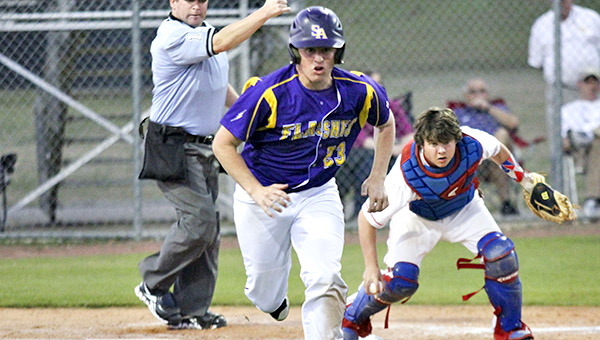 St. Aloysius’ Justin Erghott sprints to first base to being avoid being thrown out Tuesday against Riverfield Academy. The teams split a doubleheader at Bazinsky Field. St. Al won the first game 10-0, and Riverfield took the second 11-5. (Courtland Wells/Vicksburg Post)

The St. Aloysius Flashes ran their winning streak to 11 games, and then saw it evaporate into thin air all in the same day.

Tyler Breithaupt went 3-for-3 with two doubles and three RBIs as the Flashes beat Riverfield Academy 10-0 in the first game of a doubleheader Tuesday at Bazinsky Field.

“We could not put at-bats together and gave them extra outs,” St. Al coach Sid Naron said. “I did not have them ready to play.”

Landon Middleton pitched a five-inning complete game in the opener, and was backed by plenty of offense. Kieran Theriot, Jake Pierce and Justin Ehrgott all had two hits apiece.

“Being the conference opener, you hate to lose one of the three games at home,” Naron said. “But we have an opportunity Thursday to win the series and I believe our guys will respond.”

The third game of the series will be Thursday at 6 p.m. in Rayville, La. It was moved up one day because of a schedule conflict with a school function at Riverfield.

Franklin Academy scored four runs in the first inning, four more in the fifth, and held off a late rally by Porters Chapel Academy to win in the District 5-AA opener for both teams.

Sterling’s two-run single in the bottom of the first inning put Warren Central ahead, and it blew the game open with five runs in the third. Lewis tripled and scored on an error in the third-inning rally.

Tyler McRight had an RBI single in the fifth inning and Hank Holdiness hit a sacrifice fly to make it 9-1.

“It was some good and some bad. We didn’t do what we were supposed to do offensively. We had some bright spots, though,” Warren Central coach Conner Douglas said. “We have to eliminate the freebies on the mound and defensively.”

Aaron Greene started on the mound and earned the win for WC. He went four innings, allowed one unearned run, no hits and two walks. He struck out six.

Morgan Jarabica pitched the last three innings without giving up a run. He allowed one hit and one walk, and struck out five.

Warren Central beat Greenville for the fourth consecutive time, and the 23rd time in their last 25 meetings. It also won its 13th consecutive division game — Greenville was the last division opponent to beat the Vikings, back in 2015 — and remained in first place.

WC and Greenville will play again Friday in Greenville.

“We are happy, but far from satisfied. All our struggles are simple fixes, and I’m glad our mental mistakes happened when they did and not in the division or the playoffs. We have learned valuable lessons from it,” Douglas said.

Vicksburg’s spring break bounce, it seems, is over.

Ridgeland scored 10 runs in the bottom of the first inning and hammered the Gators in a Division 4-5A matchup.

After winning two out of three at last week’s spring break tournament at Bazinsky Field, Vicksburg (3-8, 0-3 Division 4-5A) has been outscored 32-2 in two games this week. It’ll get another crack at Ridgeland Friday night at home, and then hosts Natchez on Saturday afternoon.

Alfred Barnes and Chandler Luke each had a single for Vicksburg, but the rest of the lineup did not have a hit. After Luke led off the fourth inning with a single, courtesy runner Rashad Flaggs scored the Gators’ only run on a passed ball.