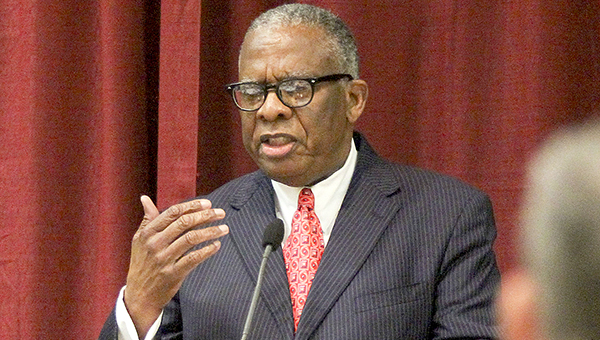 If the city of Vicksburg is to grow and prosper in the future, it needs to do five things, Mayor George Flaggs said.

“These five things have to happen, I don’t who the mayor is and who the aldermen are,” he told diners at the Vicksburg-Warren Chamber of Commerce monthly luncheon. Flaggs was on the program with Warren County Board of Supervisors president Richard George to discuss their offices and the future.

The city cannot expect to be able to attract and keep business and industry unless it improves its infrastructure and keeps it in good order, especially its utilities, he said.

While everyone looks at the major crimes like murder, he said, they ignore the crimes such as burglary and other criminal activity going on in the city’s neighborhoods.

“You need to be able to lock your car and go into your home and feel safe,” he said. “People are unable to sit on their porches. We are one of 21 communities listed as a retirement community, but how can we be that when people don’t feel safe?

“This is where community policing and zero tolerance comes in,” he said, adding those policies can help deter crime.
Build more affordable, low-income housing

“Houses, condominiums; people want to own their own home and invest in it so they can later sell it and collect their equity.”

He said the city is tearing down old, dilapidated homes, but “we’re not replacing them.” Those open areas left by the demolition, he said, need to have new homes built on them so they can be occupied and provide property tax.

He said one good place to begin the affordable home revival is the Kuhn Hospital property.

“It would be a good place to develop homes with a park and bicycle paths,” Flaggs said. “That’s what I intend to do with it after those buildings are torn down.”
Future youth sports facilities

The sports complex, he said, needs to be completed so area youth will have a place to go. He said recreation facilities also need to be built in the North Ward.

“Why does everything have to be south of Clay Street?” he asked. “We need to go across the railroad tracks.”

Flaggs said the city needs more small businesses and create opportunities for entrepreneurship in the city that will encourage people to start and open businesses that will attract people to the area,

“We want to give our young people a something to come back home for,” he said.