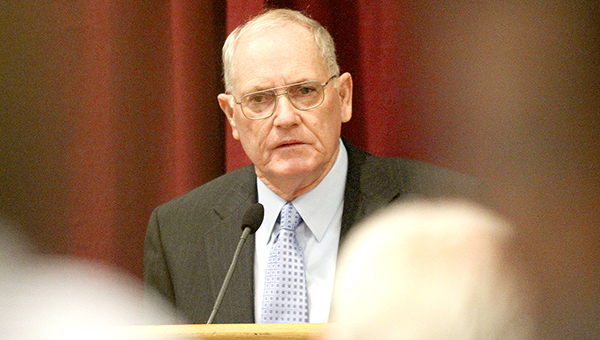 President of Warren County Board of Supervisors Richard George speaks during the March Chamber Of Commerce luncheon on Wednesday at the Vicksburg Convention Center. (Courtland Wells/Vicksburg Post)

Richard George put the people attending the Vicksburg-Warren Chamber of Commerce’s monthly luncheon Wednesday on notice — property tax increases are on the way.

“You either get ready for the future or you get left behind,” the president of the Warren County Board of Supervisors said. “Most of the times, opportunity sometimes appears on the horizon at the most inopportune moment. In our role, taxing is a duty, a responsibility. It can be gruesome. Like old age, it’s really a reality and very tough to deal with.”

George was part of a program with Mayor George Flaggs Jr., in which the two officials discussed their respective offices and their thoughts on the future.

In most cases, property taxes, George said, are the county’s only means of raising revenue.

“All this is to warn you taxes are going up, but they’re going up for specific reasons, reasons that mean the difference whether we prosper in the future or sink into the mud of what we claim is our greatest asset, the Mississippi River,” he said.

One of those reasons is a new county jail.

After the lunch, George would not say how much the county would raise property taxes. That, he said, would depend on the design and the size of the jail, and the cost of operations as the jail increases capacity from 125 to 250 to 300 people.

The last county millage increase, exclusive of the Vicksburg Warren School District millage, was in 2016, when the board of supervisors increased the .55 mill rate for Hinds Community College by 1.4 mills to help fund construction of a new multi-million dollar, 40,000-sqare-foot addition to Vicksburg’s campus to help with educating and training students.

Public safety, protecting the public from criminals, George said, is expensive. “Terribly expensive, but it’s an absolute must.

“We should have moved a bit sooner by having the jail constructed by now,” he said. “When we started that process, the economic situation in the United States was quite a bit different; it’s a bit different in that it has improved some, (but) not where we’d like it to be.

“But there comes a time when you can wait only so long and you’ve got to do it or forget it, and we’re at the point where we’ve got to do it. You’ve got to have the faith that your elected officials, as distasteful as it may be, we’re going to do what they have to do to protect our future, and public safety, obviously, is as serious as it gets.”

He said the supervisors plan to build jail that will last, and provide law enforcement the tools it needs to do its job.

“Dedication, determination to control your environment by the means that are necessary without fail, is our responsibility,” he said. “And unfortunately, it’s going to be your responsibility to pay for it.

“For years and years, we operated the port of Vicksburg Terminal,” he said. “It’s been an industrial, major point for Vicksburg and Warren County. We have not made any great improvements at that facility since it opened except a T dock.”

He said WATCO, which operates the port under a contract with the county, has worked to attract business to the port, and the county needs to make improvements to improve the port’s ability to handle increased cargo. One improvement, he said, is an E-Crane, that operates on a pedestal and can handle cargo faster than the port’s present equipment. The crane’s cost is estimated at $4.5 to $5 million.

“We have trucks lined up and down the side of the road at the port of Vicksburg waiting four, five, six, eight hours to be loaded. Nobody’s making money doing that,” he said. “Barges backed up in the river. Nobody’s making any money. We become less attractive every day.”

WATCO, he said, has offered to be a partner in improving the port and help make some capital improvements to the port, with the county purchasing the E-Crane and installing it on a pedestal between the two existing cranes.

The work, he said, would be the first major improvements at the port since it was built. He said after the luncheon the work would probably be financed through a separate loan that would include other capital projects, like replacing the roof on the Warren County-Vicksburg Public Library.

Vicksburg is a vibrant city, and it is due in part to the strides of the Vicksburg Main Street program.... read more