Missy Gators have a rough night against Germantown 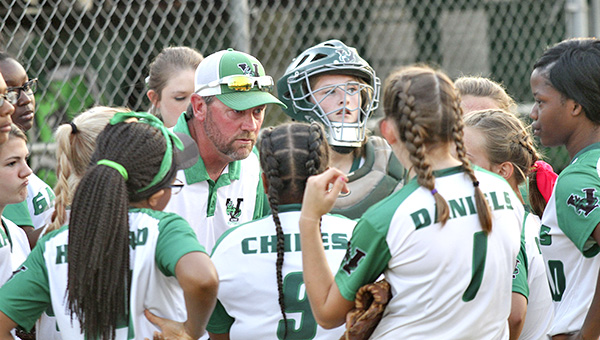 The Germantown shortstop hit a three-run home run and an RBI single in the first inning, drove in two more runs with a double in the second, and finished 3-for-3 with a six RBIs and three runs scored as the Lady Mavericks crushed the Missy Gators 18-3 at the Softball Swamp.

Germantown (9-3) scored 13 runs in the first inning and five more in the second, and won via the mercy rule in only three innings. It had 11 hits and took advantage of a dozen walks issued by Vicksburg’s pitchers.

Madalyn Wilkinson was 3-for-3 with two doubles, two RBIs and three runs scored for Germantown, and Megan Cummins drove in two runs. Every Germantown starter either scored a run or had an RBI.

Vicksburg (2-6) only had two hits. Bethany Martin singled and scored a run, and Markayla Chiles also had a single.

“They are a very good hitting team with pitching. Our pitching struggled tonight,” Vicksburg coach Brian Ellis said. “Twelve walks with 12 hits to go along, ouch! It leaves a big mark.”

Germantown beat the Missy Gators for the second time this season. It won the first game 15-0 on March 10. The Missy Gators will try to get back on the right track Monday when they host McComb at 6:15 p.m.

Warren Central cleared the lower levels of Division 4-6A and now will take a shot at the top prize.

April Lynn tripled, had four RBIs and scored twice as the Lady Vikes routed Greenville for their second consecutive win over one of the division’s bottom feeders. They improved to 7-6 overall, 2-0 in the division, and will travel to play Pearl on Friday night before taking on perennial nemesis Clinton at home on Tuesday.
Clinton (7-6, 2-0) has beaten Warren Central 14 consecutive times since 2010. The teams will play again in Clinton on April 6.

Warren Central beat Murrah 20-1 on Tuesday and crushed Greenville on Thursday in a pair of tune-up games that coach Dana McGivney said did little to prepare her team for next week’s showdown. After drawing 20 walks against Murrah, the Lady Vikes had 12 against Greenville.

Warren Central only had two hits in Thursday’s game, which was over via the run rule in less than three innings. Lynn’s triple drove in a pair of runs in the bottom of the first inning and Ashley Coley had a single in the third.

Lynn’s triple gave WC a 3-1 lead, but Greenville actually tied it with two unearned runs in the second. The Lady Vikes then erupted for 11 runs in the bottom of the second and five more in the third to put it away.

“We hit the ball hard when strikes were thrown and we didn’t chase bad pitches. So all in all, a good night at the plate,” McGivney said. “We made a couple of errors in the field so we need to clean that up, but all in all a good night.”