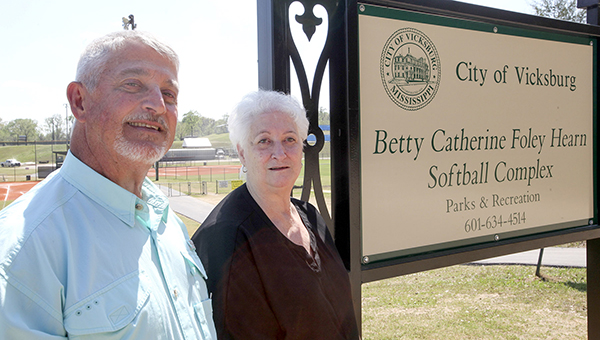 Son and daughter of Betty Hearn, Sara Baker and Jim Hearn, pose for a photo in front of the Betty Catherine Foley Hearn Softball Complex on Thursday. The softball was recently dedicated to 'Mother of Softball' who founded the Vicksburg Girls Softball Association. (Courtland Wells/Vicksburg Post)

From her childhood spent playing ball with her father to a lifetime spent coaching and playing the game, softball and Betty became synonymous in Vicksburg.

She played the game in women’s leagues into her late 60s, coached adults and children for more than 50 years and was the leading force behind developing youth softball leagues Vicksburg.

“She has playing ball since way back when I was a kid,” Hearn’s daughter Sarah Baker said. “I know she was playing down at the YMCA and there was some guy that came down there and paid her a dollar every time she hit a ball over the fence.”

Hearn died in March of 2016 at the age of 92, but her lifetime of dedication to the sport will now be permanently remembered. The fields for the Vicksburg Girls Softball Association have been dedicated in her memory and renamed the Betty Catherine Foley Hearn Softball Complex.

“Mawmaw would say she didn’t want it, because that is the way she was, but she deserves it,” said. Baker “She literally went to bat for these girls.”

One of Hearn’s biggest contributions to the game came in the late 90s when she fought for the creation of a youth fast pitch softball league in Vicksburg. She had created a midget league in 1986 and was instrumental in the creation of a slow pitch league first through the YMCA and then the city.

In the late 90s, she saw the need for something more to continue to grow and develop softball players in Vicksburg and worked to bring fast pitch softball to the community.

“Hearn said that if these girls want to go to college, we have to start it here,” Hearn’s daughter-in-law Babs Hearn said. “She fought for it for several years. There was big opposition against her on the board. When she finally got it started, I think the first year was only four teams.”

The league has continued to grow to this day and features teams from an under six division up to 16 years old. Her efforts also led to the creation of high school softball in Vicksburg.

“That was her life. She was at the fields all the time,” Babs Hearn said. “If she had a team and there was no field to practice on, she searched until she found one. She coached some girls in the 60s and then she coached their daughters.”

The effort to name the fields after Betty Hearn was led in recent years by Rick Daughtry, the president of the Vicksburg Girls Softball Association. The idea was originally presented when the fields were built according to Daughtry, but it took the extra push over the past few years to get it done.

The ceremony was held during opening ceremonies Monday with Hearn’s granddaughter throwing out the first pitch to her great-granddaughter.

“I think it was well deserved,” Baker said. “We are proud of her, all of the family is proud of her…She enjoyed it. She loved the kids and she would have been very proud to see the little bitty kids out there the other night. They were there because she started this stuff.”