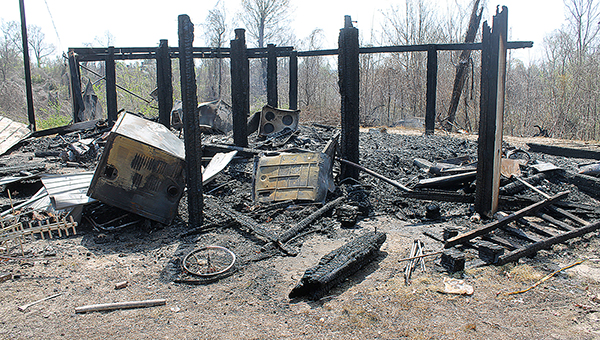 This Yazoo County home was destroyed by fire Monday, which was determined as arson. (Photo courtesy Yazoo Herald)

YAZOO CITY — The house fire that sparked a wildfire that threatened over 50 homes in Yazoo County earlier this week is now being investigated as an arson case.

Terry Gann, chief investigator with the Yazoo County Sheriff’s Department, said the arson investigation is ongoing and urges anyone with any information to contact the sheriff’s department.

The fire first erupted at a home located at 123 Halford Lane around 3 a.m. Monday. The embers from the house fire spread to a tornado ravaged area that was filled with dead wood.

“Pending the state’s case on the house fire, the sheriff’s department may pick up the charges of arson,” Gann said.

The state fire marshal’s office said it couldn’t comment on the case but confirmed it was an open investigation.

“The Mississippi Forestry Commission is always proud of our Wildland Firefighters for a job well done in tough and demanding conditions,” Forester said.

“We are also incredibly pleased with the quality of interagency communication that took place between our valued volunteer firefighting, emergency management, and law enforcement partners. The assistance of these partners allowed us to prevent loss of life and homes while protecting our state’s natural resources.”

Forester added that the only structure destroyed was the home where the fire started.  He also said 19 landowners had acreage affected by the fire.

“Anyone that sets a fire is responsible for damages caused by that fire if it escapes and burns or damages the land or property of another,” Forester said.

During the Lenten season, many Christians participate in a seasonal service that helps them further prepare for the coming of... read more