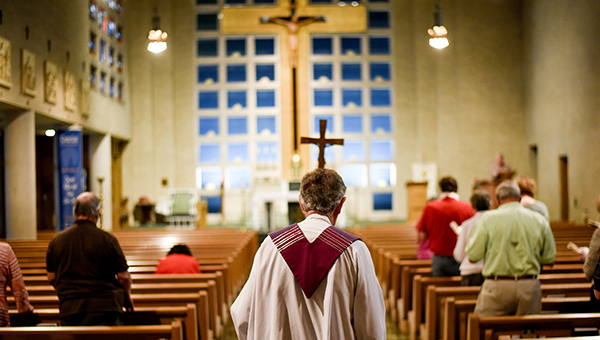 During the Lenten season, many Christians participate in a seasonal service that helps them further prepare for the coming of Easter by remembering Christ’s passion and death.

It’s a practice that began in the Middle Ages, when Christians on pilgrimage to Jerusalem retraced Christ’s journey to Calvary, stopping at various locations along the way for reflection, prayer and meditation.

The devotion later spread to churches in Europe, where a series of 14 images or small crosses were placed on church walls, and people would walk from station to station to pray and reflect on the place the image or cross represented.

“The passion of Christ is meaningless unless the resurrection is kept in mind,” said the Rev. Tom Lalor, pastor of St. Paul Catholic Church. “Passion, death and resurrection is the new Passover — from the death of sin to the life of freedom and love.”

The 15th station, he said, is done at the tabernacle on the altar, which represents the risen Christ.

“For me, it (the Way of the Cross) is a very beautiful devotion, because St. Paul said in Philippians 3:10, ‘To know him and the power of his resurrection and the sharing of his sufferings by being conformed to his death, if somehow I may attain the resurrection from the dead.’

“We take the cross itself and what it means to bring us closer to Christ.”

Both the Catholic Church and the Episcopal Church hold the Way of the Cross during Lent.

“The Catholic service includes prayer, scripture and song with the priest and the congregation having different parts during the service as a cross moves to each image representing a stage or person in Christ’s journey to the crucifixion.

The Rev. Sam Godfrey, rector of Christ Episcopal Church, said the Episcopal Church has 14 stations, adding there are three different versions of doing the Way of the Cross.

“We actually walk around the church and follow someone leading carrying a cross, and then we have someone else who’s reading for the stations — the prayers and the other parts — we stop at each station,” he said. “We start and end at the altar.”

He said the illustrations for each station were painted by Phyllis Blake, a parishioner.

Several years ago, Godfrey said, on the first Sunday of Lent, “Instead of preaching a sermon, we did the way of the cross during the service.” Parishioners, he said, had the option to stay in their seats or walking.

“Usually anyone who can walk, does,” he said.

The Friday before Palm Sunday, weather permitting, Godfrey said, the Way of the Cross is held in the church garden at 6 p.m. using a version written by the Rev. Jeff Bayhi, a Catholic priest in Louisiana and sung by Aaron Neville.

“It is a very moving piece,” he said. “It’s something I recommend people do.”